Toyota and Mazda to jointly build a $1.6 Billion US Assembly Plant

Toyota Motor Corp and Mazda Motor Corp plan to spend $1.6 billion in a joint venture auto manufacturing plant in the US. The new US assembly plant will boost manufacturing and expand employment for America by creating 4,000 jobs in the auto industry. The Toyota Mazda plant will have an annual production capacity of 300,000 vehicles. It is due to begin operations by 2021.

After reassessing the auto industry market, Toyota has changed its strategy to make Corollas at a plant in Guanajuato, Mexico. Instead, it will manufacture Tacoma pickups at the Mexico plant which is currently under construction. The auto industry leader in the US was criticized for moving auto jobs to Mexico.

Additionally, Toyota and Mazda plans to collaborate on advanced auto technology. This includes making and supplying products for each other such as electric vehicles, connected cars, and safety features. 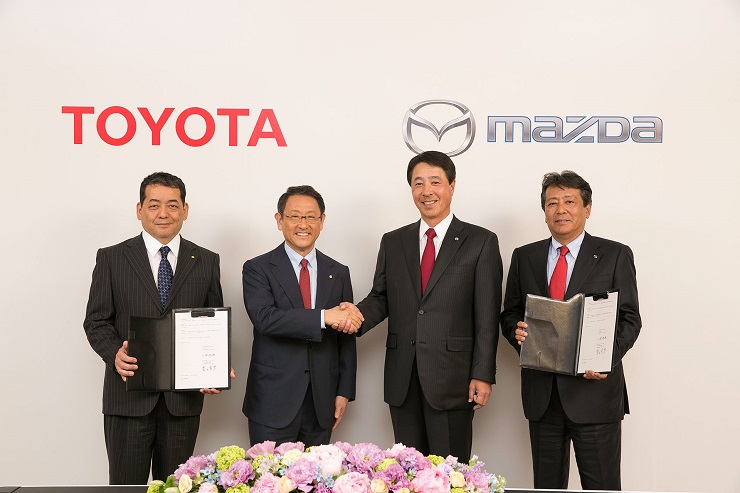 The Toyota Mazda plant is due to begin operations by 2021.

The Toyota Mazda deal is expected to be final by October. It resembles the alliance between French automaker Renault and Japanese automakers Mitsubishi and Nissan.

With growing competition from tech giants in the auto industry like Alphabet’s Waymo, Apple, and Amazon, traditional automakers are now turning to commodities. The Toyota Mazda plant will boost cost-efficiency as well as economies of scale. It will also help the two auto industry leaders to work on other important issues such as global warming, environment, and safety.

Mazda, based in Hiroshima, Japan had formed a partnership with Michigan-based Ford Motor Co. The US automaker bought 25 percent of Mazda in 1979, and raised it to 33.4 percent in 1996. Although, Ford cut its stake in Mazda in 2008.

On Friday, Toyota posted $5.6 billion profit from April-June, up by 11 percent from a year earlier. Meanwhile, its quarterly sales rose to 7.05 percent to $64 billion as vehicle sales have improved worldwide.

In 2016, Toyota lost its title as the auto industry leader to Volkswagen, after four consecutive years of dominance. Traditional automakers now face a challenge from the Renault and Nissan and Mitsubishi alliance.

Anna Domanska
Anna Domanska is an Industry Leaders Magazine author possessing wide-range of knowledge for Business News. She is an avid reader and writer of Business and CEO Magazines and a rigorous follower of Business Leaders.
« This One Leadership Skill 95% of Managers Lack
Tesla Model Y to hit the market before Model 3 »
Leave a Comment
Close