Johnson & Johnson, Cisco, and Adobe are among our list of top five global Eco-friendly companies with best green initiatives.

“Presidents, celebrities, politicians, CEOs, and journalists: People listen to you. They are influenced by you. And therefore, you have an enormous responsibility. And let’s be honest: This is a responsibility that most of you have failed to take.”

These hard-hitting words were spoken by the 16-year old Greta Thunberg who is at the forefront of the global movement of student climate strikes. The youngest Nobel Prize nominee used these words to call out the “powerful people” present at the R20 Austrian World Summit in Vienna.

Climate change is a real issue affecting everyone organism on this planet. While there are many people who brush aside this pressing problem and many companies that spill gallons of oil and contaminated residue in the oceans, there are also people like Greta Thunberg and a few Eco-friendly companies that are doing their bit for saving the world.

This World Environment Day, Industry Leaders Magazine takes a look at such green companies with high scores in green initiatives (in no particular order of ranking). 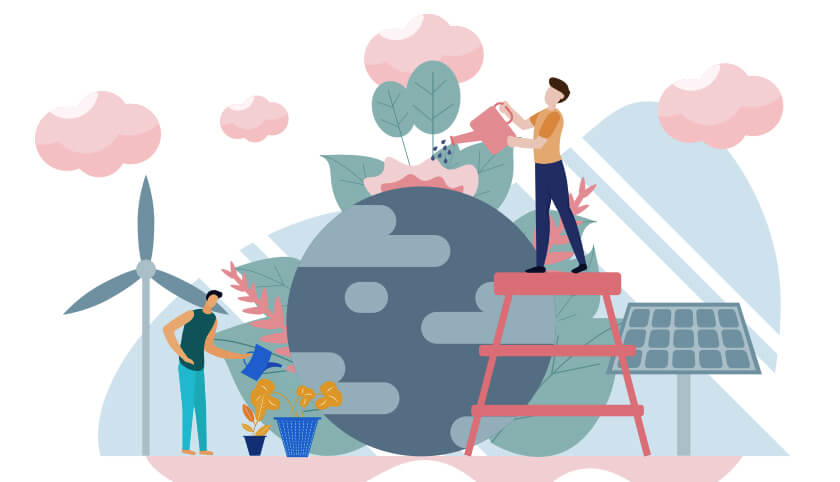 This French cosmetics company launched its global sustainability program ‘Sharing beauty with all’ in 2013 which listed out the company’s sustainability commitments for 2020. The company has successfully reduced its CO2 emissions from its plants by 73 percent since 2005.  The company follows a strict policy of forest certification of its packaging. Moreover, under its ‘zero deforestation policy,’ the company ensures that its raw materials –soy oil, palm oil, and wood-fiber-based products are in no way associated with deforestation. L’Oréal’s commitment to sustainability made him one of only two companies to receive AAA rating by CDP in 2016– Carbon Disclosure Project scores Eco-friendly companies around the world on their sustainability performance.

Siemens was named the world’s most sustainable company in 2017 at The World Economic Forum in Davos. The company’s management team includes one Chief Sustainability Officer who ensures that sustainability is embedded in the company’s corporate strategy. The company aims to become carbon neutral by 2030. The overall coverage of green electricity i.e. electricity derived from renewable sources for this company in 2018 was 55 percent. Across all operations, the company was able to reduce its waste volumes by 17 percent.

J&J is one of the founding members of the U.S Environmental Protection Agency’s Green Power Partnership. It is also one of the pioneering companies to totally remove plastic microbeads from their global portfolio of personal care products. The company claims to make 100 percent of its plastic packaging reusable, recyclable or compostable by 2025. It has a consumer recycling resource website with plentiful recycling tutorials, tips and how-to videos that any environmentally conscious human being can resort to. The company has also joined the steering committee of the Renewable Energy Buyers Alliance (REBA), which helps large-scale businesses and organizations buy zero-carbon, renewable energy.

Adobe has a well-earned distinction of being one of the best green companies in the world. Adobe’s Bangalore office is the first in India to be powered by 100 percent renewable energy. Around 73 percent of Adobe employees work in LEED-certified buildings with clean air, natural light – that’s more than 2.9 million square feet of space. In 2014, Adobe Systems became the first Fortune 500 company to install an intelligent energy storage system from Stem. Stem’s predictive analytics algorithm automatically responds to spikes in the building’s electricity use, drawing on previously stored power to reduce our energy costs without impacting operations.

Cisco is known for producing and selling sustainable products as well as conducting all its business practices with sustainability in mind. Around 80 percent of the company’s electricity use worldwide is powered by renewable sources. Cisco was able to reduce its greenhouse gas emissions by 41 percent and aims to reduce it by 60 percent by 2020. Earth Aware, Cisco’s awareness campaign to support sustainability culminated into a sustainability thought leadership forum called SustainX. The company’s re-manufactured program called Cisco Refresh is another way through which the company is trying to reduce its carbon footprint. Under this program, Cisco products – ranging from routers to phones and security systems are re-manufactured.