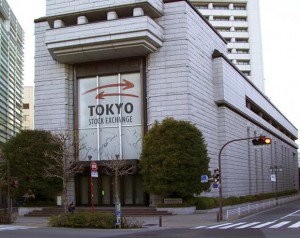 Tokyo Stock Exchange (TSE), the 4th-largest global bourse by trading volume, has confirmed plans of beginning talks with its smaller Japanese rival, the Osaka Stock Exchange (OSE), on a possible merger to strengthen its position given the recent wave of consolidation of markets that has been taking place globally.

While Tokyo Stock Exchange CEO has stated that TSE wants to list shares before any merger, this move is also viewed by many as an assertive attempt to fend off competition from other fast-growing Asian bourses.

Tokyo Stock Exchange: past and present

TSE, which is suffering from weak trading volumes and a dearth of new listings, has come under increased pressure given the flurry of mergers and alliances among global exchanges – SGX/ASX, LSE/TMX, NYSE Euronext/Deutsche Bourse – that have taken place recently.

Currently positioned as the world’s fourth-largest exchange by trading volume, having ceded ground to Shanghai, a merger with the OSE is seen as an opportunity to help TSE save on system development and other costs.

At the peak of Japan’s asset bubble in 1989, the Tokyo exchange’s market capitalisation accounted for about 40 percent of the value of global stock markets. In contrast, it now contributes just 7 percent, according to data from the World Federation of Exchanges.

The TSE has suspended plans for an initial public offering several times, the last time in 2009, and while Atsushi Saito, the chief executive of the TSE, has said that combining the TSE’s dominant position in cash equities trading and the Osaka Exchange’s strength in derivatives will make for an effective alliance, there are strong doubts in the market as to whether this will do much at all to reverse the TSE’s competitive decline.

“They must be feeling a sense of crisis that they will be swallowed by the wave of overseas consolidation,” said Tsutomu Yamada, market analyst at Kabu.com Securities. “But I’m not sure simply creating an ‘all-Japan’ bourse is the answer.”

The TSE controls more than 90 percent of cash equities in Japan, while the OSE is the leader in Nikkei futures and other derivatives, as well as the home market for video game maker Nintendo and a handful of other major tech firms.

“Excluding a few stocks like Nintendo, the OSE does not have any appealing stocks for the cash market,” said Norihiro Fujito, a senior investment strategist at Mitsubishi UFJ Morgan Stanley Securities.

“If the OSE can focus on futures trade while the TSE could absorb the cash trade, there may be good synergies and they could efficiently reduce personnel levels and costs,” Fujito said.

Atsushi Saito, TSE’s chief executive has previously mentioned the possibility of a merger with the OSE in order to counter rising competition from overseas and to remain one of the world’s major bourses.

According to market analysts, the TSE in terms of market value – estimated at about 200 billion yen if it listed its shares, roughly one-fourth of the market capitalisation of NYSE Euronext – is  likely to compare more closely to second-tier exchanges, which could make it the junior partner in any attempt to combine operations with a major overseas rival.