The use of artificial leaf to purify air has since become mankind’s biggest hope in combating rising greenhouse gas levels. And since this proposal, researchers have employed various kinds of leaf technology to develop artificial leaves that will mimic the air purification process.

Through photosynthesis, plants take in carbon dioxide (CO2) and water to generate energy and oxygen. This natural process makes them nature’s air purifiers.

While some artificial leaf designs have worked perfectly in the lab, mimicking photosynthesis, they have failed to manifest this process in the real environment.

A team of researchers from the University of Illinois, Chicago (UIC) may have made a breakthrough – succeeded in moving artificial leaves out of the lab and into the real world without losing the targeted process.

The challenge with the existing leaf technologies is that the artificial leaves are not developed to pull CO2 from the air themselves since they are nurtured in pressurized tanks. In the real environment, plants pull CO2 from the air on its own, said UIC researcher Meenesh Singh. A new design developed to give artificial leaves this ability has been described by the UIC team in a paper published in the journal ACS Sustainability Chemistry & Engineering. 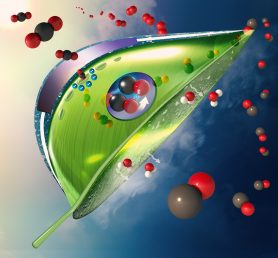 A traditional artificial leaf is placed inside a water-filled capsule constructed from a semi-permeable membrane. This allows the water to evaporate through the membrane when warmed by the sunlight while allowing the capsule to suck in carbon dioxide. This process allows the traditional artificial leaf placed inside the capsule to convert the carbon dioxide (CO2) to carbon monoxide (CO) and oxygen.

The produced CO could be extracted from the system and used to create synthetic fuels such as gasoline and methanol. And the oxygen collected or released back into the environment.

By using a specialized membrane to develop traditional artificial leaf technology “the whole unit is able to function outside, like a natural leaf,” said Singh in a press release.

The efficiency of the new artificial leaf technology

An artificial leaf developed using this design would convert CO2 to energy and oxygen 10 times faster than natural leaves, the UIC researcher claims. The team’s calculation is that 360 of the specialized membrane artificial leaves, each 0.2 meters wide and 1.7 meters long, would generate about 0.5 ton (~450kg) of CO every day.

This implies that in just one day, the artificial leaves could cut down CO2 levels in the air by 10 percent if spread over 400 square meters.

Most interestingly, the team’s design utilizes “readily available materials and technology,” which can be combined to “produce an artificial leaf that is ready to be deployed outside the lab where it can play a significant role in reducing greenhouse gases in the atmosphere,” Singh said.

Anna Domanska
Anna Domanska is an Industry Leaders Magazine author possessing wide-range of knowledge for Business News. She is an avid reader and writer of Business and CEO Magazines and a rigorous follower of Business Leaders.
« Apple Patent Suggests Drivers Can Secure Vehicles Via Face ID
Facebook Could Face Multi-Billion Dollar Fine Over Privacy Violations »
Leave a Comment
Close