The World’s Most Advanced Supercar is here! Undeniably a Masterpiece the BMW i8 Hybrid Supercar comes straight from the future!

BMW is testing Autonomous Driving Project in China Next

BMW’s i8 is a high-tech stunner and is set to be the most expensive and rare plug-in hybrid electric car at the price tag of $140,000. This masterpiece has the acceleration of a Porsche 911 with three times its fuel economy similar to that of a Prius, and – word is that the i8 is already sold out! 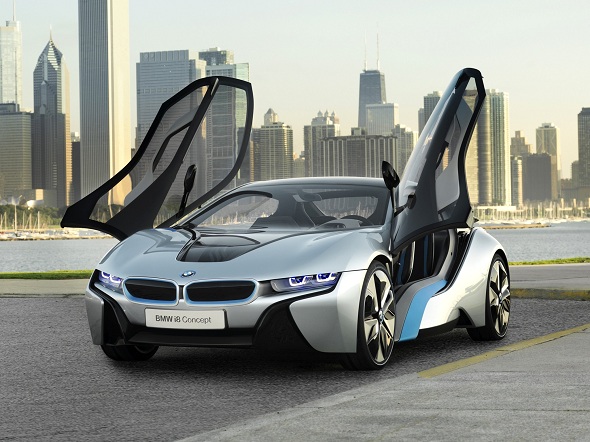 The high performance supercar dons a carbon fiber passenger cell which is stiff and lightweight. The carbon fiber tub is bolted to two aluminum frames and a turbocharged engine, 7.1 kilowatt-hour lithium-ion battery packs in the middle as well a 231 horsepower electric motor powering and 6-speed automatic transmission driving the front wheels! This 3-cylinder eco supercar is said to be the first page in the history of a new automotive era.

Its multilayered skin is nothing but molded thermoplastic that stiff as steel and half its weight. There were other weight-saving measures taken during the designing, which includes aluminum wiring and chemically hardened ultrathin glass keeping the weight under 4,000 pounds – 3,267pounds to be precise! Its doors can swing up and forward. 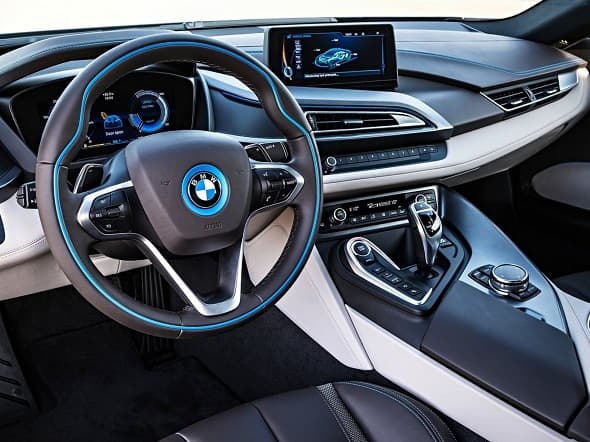 Recharging the lithium-ion battery takes 1.5 hrs at 240 volts or 4hrs at 120 volts. Its Eco-Pro button can increase electric efficiency by 20% which happens automatically by softening its motor response and optimizing climate-control settings. Its high-performance tires come with narrow wheels and tall tires in the European version. 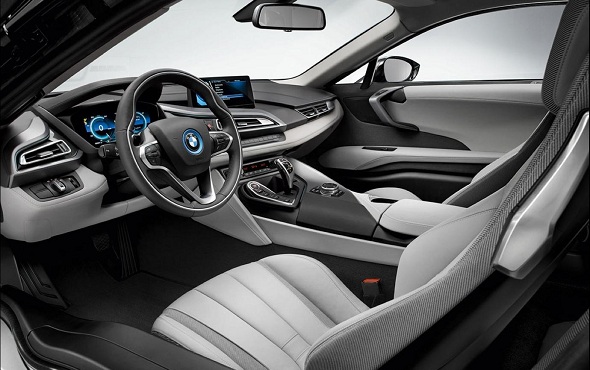 The brakes of this hybrid supercar are strong – BMW claims to reach an acceleration of 0 to 60 in 4.2seconds and can reach a top speed of 155 m.p.h. This car from the future promises emission free commuting and makes all sports cars look like a childs play. 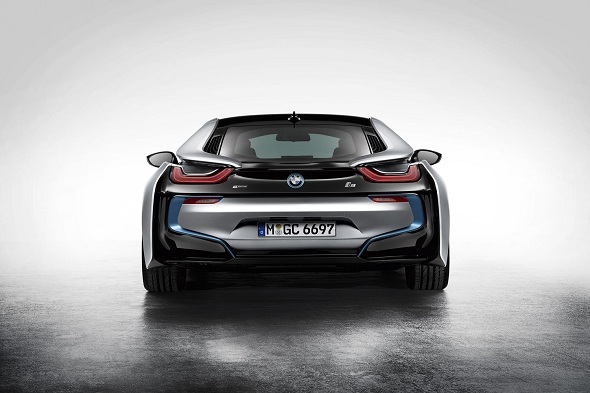 BMW’s electric vehicle lineup launched first in July last year, with the debut of i3 all-electric car ranging somewhere about $40,000 with a 22k Wh lithium-ion battery for a range of 80 to 100 miles.

The plug-in hybrid i8 is scheduled for launch in autumn 2014 and will be world’s first production car to offer BMW laser headlights. The BMW laser headlights provide around 30% more energy-efficiency compared to the standard Led headlights, providing quite powerful road illumination for a range of up to 600 meters.