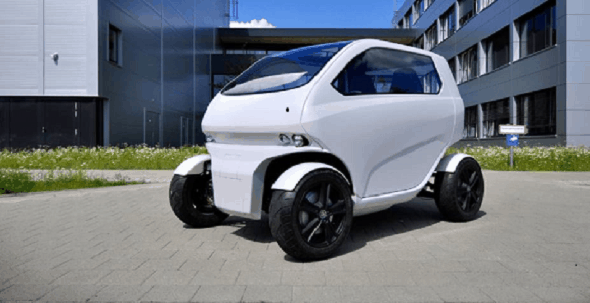 The explosive growth of cities has got commuters constantly struggling through ever-increasing congestion on the roads and limited space for parking.

The less space on the road has increased the option of the small car and similar other vehicles. These cars act as a perfect solution as it can squeeze into smaller spaces and maneuver in ways the current vehicles can’t.

One such vehicle is the EO Smart Connecting Car 2 which is a flexible electric vehicle which shrinks to squeeze into tight parking spaces and is capable of driving sideways, similar to a crab, and can turn on a dime.

The EO Smart Connecting Car 2 is known as a micro car, an inventive design developed by DFKI Robotics Innovation Center located in Bremen, in Germany, where software designers and developer’s team along with construction and electronics engineers have been building the small smart car project for the last three years.

First introduced in 2012, the car is in its second iteration. Although the car drives like a traditional vehicle, each of its wheels is powered by a separate motor. With this functionality, the car is capable of driving sideways to fit into tight spaces in urban areas for parking where appropriately spaced parking spots are not always available, such as a small space on the side of the road, said the vehicle’s project manager Timo Birnschein.

He said that the whole transition process between normal driving and driving sideways takes just about four seconds.

Drivers in the connected EO Smart Connecting Car 2 can take their hands off the wheel; the electric car changes into fully autonomous mode.

The prototype is able to go to speeds up to 40mph (65 km/h) with a range of up to 30 to 44 miles (50 to 70 kilometers) on four-hour full charge of battery. It is capable of shrinking itself up to 1.5 meters if required while keeping all four wheels on the ground. This feature has motivated the team to use it in future cities, Birnschien said.

He further added that the car is capable of reducing its own size by nearly 80cm, which is almost the length of a bike. With this it can get into any parking space, and still be able to turn and drive sideways.

The team has so far invited many car makers to review the vehicle and the reactions have been positive.