Plastic pollution finds itself on the agenda at the United Nations Environment Programme.

Plastic pollution has been one of the main culprits for extensive environmental damage. Although various countries have taken measures to limit plastic use, micro-, meso-, and macro-debris seep into everyday items endangering biodiversity.

The UN Treaty on Plastic

At the United Nations Environment Programme (UNEP) in Nairobi, Kenya, over 150 countries, environmental groups, and businesses called for tougher legislation to tackle the plastic crisis. It was held from February 28 to March 2, and the theme was- Strengthening actions for nature to achieve sustainable development goals. Attended by about 3,000 in-person and 1,500 online participants, the attendees unanimously passed a resolution to end plastic pollution by forging an international treaty by 2024. The resolution will tackle plastic pollution from production to disposal.

After the resolution was passed without any opposition, Executive Director of UNEP Inger Andersen stated that, “This is the most significant environmental multilateral deal since the Paris accord. It is an insurance policy for this generation and future ones, so they may live with plastic and not be doomed by it.” To highlight how severe the issue is, she further added that, “We produce around 400 million tons of plastic every year and 300 million tons of that goes right into the waste dump and 11 million tonnes of that into our oceans.”

Covid-19 derailed most investments and nations struggled to advance environmental goals in the aftermath of the pandemic The assembly concluded with member states passing no less than 14 resolutions to protect and preserve nature through “a sustainable, resilient and inclusive post COVID-19 recovery.” 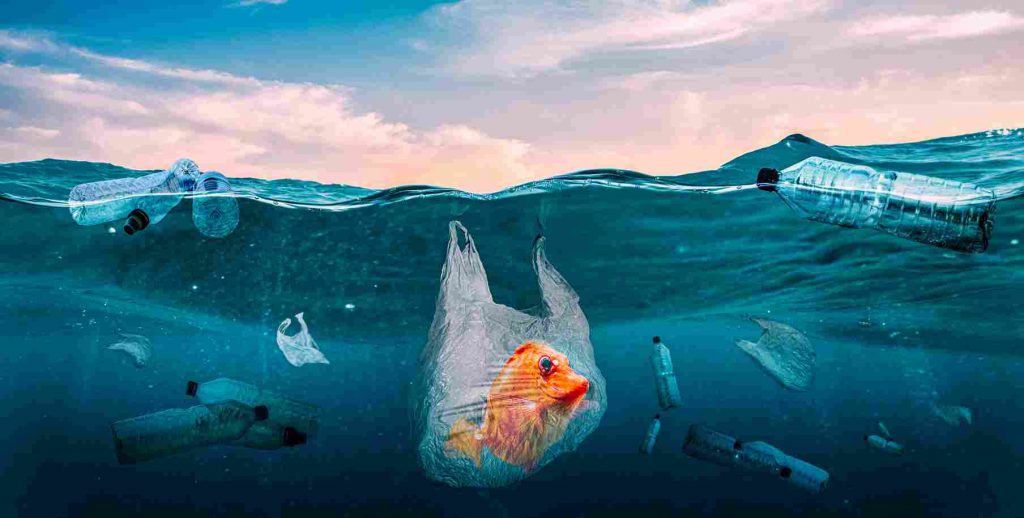 Plastics have permeated the oceans and the soil, setting the stage for toxic future.

Plastic Pollution and the Future

Plastic waste has become a major concern as the fossil fuel companies plan to increase plastic production by 40% over the next decade.

Single-use plastics may seem convenient but that is where its benefits end. World-wide, approximately 13% of plastic is recycled while the rest end up in landfills and oceans. Furthermore, petroleum-based plastics are non-biodegradable. Plastics used in bottles, bags and food containers contain chemical additives such as endocrine disruptors, which have been found to cause cancers and affect immunity in human beings and animals.

Out of the seven billion tonnes of plastic generated by the world, only nine percent has been recycled. Researchers have found microplastics everywhere from the bottom of the ocean to sediment at the top of Mount Everest, and even in the placenta of unborn babies. It is a chilling testament to how much plastic has permeated the environment. Experts believe that plastic pollution will triple by 2040 unless concrete measures are put in place to prevent the problem from growing bigger.

Chemical and plastics manufacturers lobbied against the move by the UN, while some multinational companies, including Nestle and Coca-Cola, who are some of the worst offenders, supported the resolution.

Ellen MacArthur Foundation’s communications manager for plastic Iulia Strat put it succinctly when she commented, “Plastic pollution doesn’t care about borders. So you can be a perfect country with a perfect plan to tackle plastic pollution but still be open to the waste from another country because it’s all connected.”

During the Special Session to commemorate the 50th anniversary of the UN Environment Programme (UNEP), member nations pledged to restore the ecosystem to combat climate change and to confront painful realities head on as we fulfill our duties as custodians of the planet for future generations. They also promised to formulate a sound, legally-binding policy that addresses chemicals, waste, and paves the way towards nature-based solutions.

Christy Gren
Christy Gren is an Industry Specialist Reporter at Industry Leaders Magazine she enjoys writing about Unicorns, Silicon Valley, Startups, Business Leaders and Innovators. Her articles provide an insight about the Power Players in the field of Technology, Auto, Manufacturing, and F&B.
« Tesla Secures Environmental Approval for First Gigafactory in Europe
Bent & Broken: Better Layoffs On the Horizon »
Leave a Comment
Close