The Tesla Supercharger Restaurant: Power Your EV in Comfort

Turn your next charging stop into a family outing with the luxury supercharger station.

SpaceX CEO Elon Musk has put his plans for a Tesla supercharger restaurant into motion. Recognizing a lucrative business opportunity has long been one of Musk’s strengths. The fact that Tesla owners must wait idly for a long time while charging their EVs has not escaped his notice. This is why Musk has decided to build a luxury supercharger station that will double up as an entertainment venue. 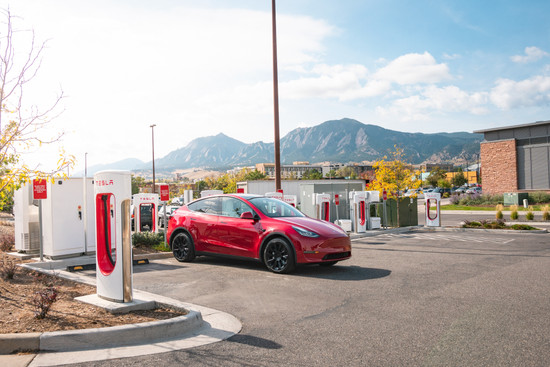 If the Musks have their way, Tesla’s supercharger stations could be the culmination of the Musk brothers’ business.

In 2018, Musk had tweeted his supercharger plans saying “gonna put an old school drive-in, roller skates & rock restaurant at one of the new Tesla Supercharger locations in LA.” In subsequent tweets, he had also discussed the possibility of making the diner menu available on the touchscreen of cars, so that drivers can order in comfort. It looks like the time has come for him to turn his dream into reality.

The Tesla supercharger restaurant will supposedly be located between Santa Monica Boulevard and Orange Drive. On May 19, Tesla submitted documents to the city of Los Angeles for a luxury supercharger station with a diner that would be open 24 hours a day at 7001 W. Santa Monica Blvd. in Hollywood.

First reported by Electrek, the plans include charging stations with a dine-in facility. It will reportedly have 29 charging stations. The proposed project site is 0.56 acres in size and is operational as a pizza place with parking.

The location for the Tesla supercharging stations is currently functioning as a Shakey’s Pizza Parlor. The plan seems to be that the present structure will be demolished to build a two-storey one. As it already has a huge parking lot, it can be remodeled to house the Tesla supercharger Los Angeles chapter. The bottom floor will house the kitchen, bar, and an outdoor bar at the edge of the building. The top floor will reportedly have outdoor rooftop seating with a bar, several tables, two rows of a theater-style seating area, and a standing bar behind the theater seats. The bottom floor will also have a “carhop area” for waitstaff to bring meal orders out to cars in the parking lot.

The theater-style seating will look out on a parking lot with 29 supercharger stalls and 34 total spots – the remaining five will have level two chargers for lower-speed charging. The parking lot will have two screens visible to the rooftop area and to the cars in the parking lot. The theater will screen features that are approximately 30 minutes long, which is the normal time required for a meal or a charging session. People with knowledge of the matter mentioned that Tesla is seeking permission to keep the charging stations open 24×7. The theater might not be kept throughout as there is no word on Tesla asking the city to change rules around screening times. It remains to be seen whether the plans will be given the green signal or disapproved due to environmental or city reviews.

Another thing that most people don’t know is that Elon Musk’s brother Kimball owns a chain of restaurants. Kimball also serves on the board of Chipotle Mexican Grille, which goes to show that he has the business acumen to manage the restaurant side of the venture. If there is anyone who can pull off this EV charging-cum-diner idea, it is the Musk brothers.

Christy Gren
Christy Gren is an Industry Specialist Reporter at Industry Leaders Magazine she enjoys writing about Unicorns, Silicon Valley, Startups, Business Leaders and Innovators. Her articles provide an insight about the Power Players in the field of Technology, Auto, Manufacturing, and F&B.
« Costco Revenues for Q3 Beat industry Estimates
Fortune 500 CEOs and Their Alma Maters: Best Colleges to Become a CEO »
Leave a Comment
Close