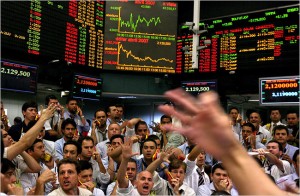 The rise of titanic exchanges

Some of the world’s most powerful stock markets merge to grow stronger.

Last week we reported plans of a merger between the veteran LSE and the energy sector’s favourite TMX. The update there is that majority market analysts feel that LSE will navigate through the regulatory process and proceed in taking over TMX.

In the meanwhile, it seems like some other exchanges, some of the most powerful in the world, have also been working on similar lines, trying to merge and/or take-over other gigantic stock markets.

While the deal between Singapore’s SGX and Australian ASX that has been going on since October 2010 has almost been sealed, the newest in this spate of “rising titans” is a colossal merger agreement between the Deutsche Boerse and NYSE Euronext, which if completed, will result in the creation of the world’s biggest exchange.

“Consolidate and create economies of mammoth scales” seems to be the new mantra, huh?

Goliath of all Merged Exchanges 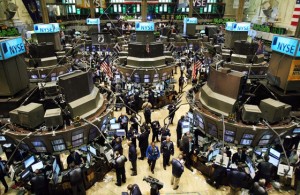 To be named “Premier Global Exchange Group” (talk about being modest!), NYSE Euronext and Deutsche Borse have unveiled further details of their planned combination which would create the biggest stock exchange group in the world.

NYSE Euronext’s revenues have recently been witnessing falls because of competition from cheaper computerized stock exchanges in the US and Europe. Many other global stock exchanges have also combined to save costs. If it comes through, this deal will give NYSE Euronext a larger footprint in the more lucrative business of trading in futures and options contracts

Set to form a powerhouse with more than $20 trillion (£12.5 trillion) in annual trading volume and operations in Germany, France, Britain, Amsterdam, Portugal, Belgium, and the United States, NYSE Euronext and Deutsche Borse said the “merger of equals” would “strengthen Frankfurt and New York as key financial centres”.

Addressing obvious US concerns, they added that Reto Francioni, chief executive of Deutsche Borse, would be chairman of the new group and would also be in charge of group strategy, while Duncan Niederauer, boss of NYSE Euronext, would be chief executive.

The exchanges also said that they were aiming to achieve extra savings of “at least” €100m from the combination, in addition to synergies of €300m sketched out last week.

Mr Francioni said, “This transaction brings together two of the most respected and successful exchange operators in the world to lead the way in global capital markets and set the standard for growth, quality and market reach. The combination makes sense for all of our constituencies. Shareholders of both companies will benefit from unique growth opportunities and synergies. Clients will have unparalleled access to markets. From a regulatory perspective, we are committed to remaining the world’s most transparent and best regulated platform.”

The ownership of the new group, which could generate around $2.7bn of pre-tax profits a year, would be 60pc by Deutsche Borse shareholders and 40pc by NYSE Euronext shareholders.

The proposed merger is subject to approval by a majority of NYSE Euronext shareholders and by 75pc of Deutsche Borse shareholders.

In their latest attempt to boost chances of acquiring regulatory approval in Australia, Singapore Exchange Limited (SGX) and ASX Limited, operator of the Australian Securities Exchange, announced changes to their merger proposals, stating that there would be an equal number of Australian and Singaporean directors on the board of the firm formed after the merger. The 13-member board will comprise five Australian citizens, five Singaporeans and three international directors, SGX and ASX is reported to have said in a joint statement.

Also stated clearly as part of the new proposal was the fact that current ASX Chairman David Gonski would be deputy chairman of the SGX-ASX firm while current SGX chairman Chew Choon Seng would be chairman of the new firm. Gonski will also chair the integration committee charged with overseeing a successful integration.

SGX also committed it would ensure ASX and all of its licensed subsidiaries maintain boards with a majority of Australian citizens and an Australian chair. In addition, all physical assets required for the operation of the ASX group businesses will continue to be developed and located in Australia. The Australian business would also be run by a chief executive based in Australia so as to provide easy access to customers and stakeholders.

The existing regulatory protections will continue to be in place after the completion of the merger deal.

The two companies said the changes to the proposal came after talks with a wide range of stakeholders.

“These commitments demonstrate SGX’s belief in the merits and benefits of the merger, address concerns that have been expressed, and provide further clarity as to how the merged entity will operate in the future,” said Chew Choon Seng, chairman of SGX.

“The changes and commitments announced today, combined with existing regulatory protections, strengthen our belief that the ASX-SGX merger proposal is in the best interests of shareholders and in the national interest of Australia,” ASX chairman David Gonski said.

The two exchanges announced their 8.3 billion U.S. dollar merger proposal on Oct. 25, 2010. If successful, it is expected to create the world’s fifth largest exchange operator.

As of 2021, over 150 million US workers identified themselves as self-employed. This means that they are responsible for their own retirement plans. Employees of big firms tend to
6 hours ago

Just shy of her 40th birthday, Vera Wang struggled to find a bridal gown that suited her taste. Her father pointed out her struggles for what they really were – a remarkable busi
6 hours ago