The Rise of the Robot Chefs in the Food Industry

Robots in the food industry? Well, yes. They will be in charge. In charge of food? Yes. For starters, robots can work for longer hours, and they also don’t make mistakes while cooking.

Outside Henn-na Hotel, which opened its doors in 2015, visitors are greeted by 10 humanoid robots. At the front-desk, 3 friendly-robots handle the check in and check out process. The futuristic hotel features 72 rooms, and has cut its human staff from 30 to just eight employees.

Although the robot restaurant is a tourist attraction, it was initially designed as an experiment to see what parts of the industrial kitchen can be automated and what tasks can only be performed by humans. The humanoid robots come from a company called Kokoro, which has been developing ‘actroid,’ a robot that looks like an actual human, for over a decade.

The human staff members at the Henn-na Hotel oversee the tasks done by the robots. Company president, Hideo Sawada, hopes the robots will carry out 90 percent of tasks in the hotel in the near-future. “We will make the most efficient hotel in the world,” he told Japan Times during an interview.

In Japan, chefs are experimenting with automation technology to operate the restaurants with robots alone. Suzumo Machinery has developed a “rice ball robot” capable of preparing sushi rice that appears as though it has been prepared into shape by a chef. 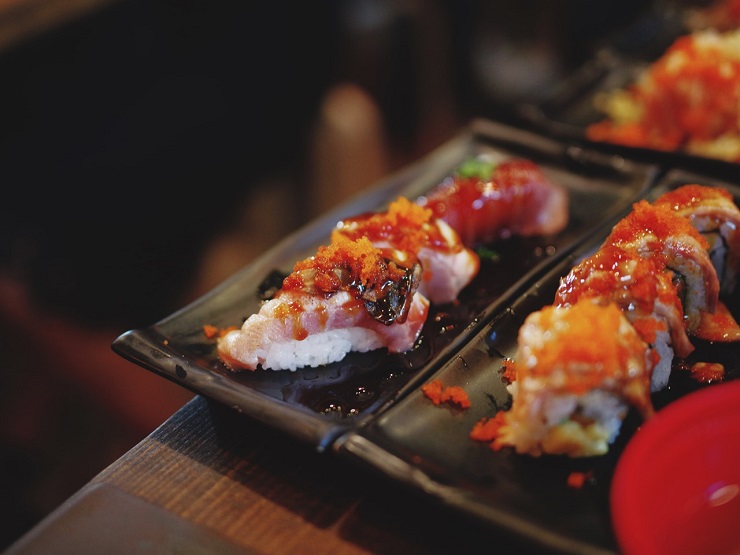 The robot chef by Suzumo Machinery could make 4,300 pieces of sushi an hour.

The robot chef by Suzumo Machinery could make 4,300 pieces of sushi an hour. The manufacturer has a 70 percent share of the domestic market for the sushi-making robot. Similarly, other Japanese manufacturers such as Yaskawa and Toyo Riki, sales have risen as a result of robots that have been used in park’s restaurants and hotels.

A Tokyo-based robotics company ZMP recently partnered with a food delivery service Ride On Express to debut its CarriRo delivery robot. Unlike most robot chefs, the CarriRo is shaped like a tiny bus, hovering over three feet tall and using cameras and sensors to travel around. One of Ride On Express’s best-known clients is the sushi company Gin no Sara. Each CarriRo will carry enough sushi to feed 60 people.

To comply with the outdated regulations surrounding autonomous delivery robots, the CarriRo will work exclusively in private areas such as office parks. Although, the plan is to get the robots on the sidewalk space as soon as they can.

Historically, Japan has always been progressive in terms of robots and their applications in daily life. The country is at the forefront of the robotics industry, with billions of yen’s worth in government and private sector investment. It’s difficult to argue against the cost-effectiveness, accuracy and productivity of robot labor which, unlike their human counterparts, make little error and have no qualms about salaries, pensions, benefits or fair working hours. In combination with the strong yen, an infamously repressing immigration policy, and decades of economic stagnation, the switch to robot workers has saved Japanese companies millions in manufacturing and labor costs.

Today, Japan is home to many world leaders in automation, including Yaskawa Electric and Fanuc. The country’s prime minister Shinzo Abe is betting big on reviving the country’s struggling services industry by 2020, just in time before the Summer Olympics.

Anna Domanska
Anna Domanska is an Industry Leaders Magazine author possessing wide-range of knowledge for Business News. She is an avid reader and writer of Business and CEO Magazines and a rigorous follower of Business Leaders.
« Whisk in a little of the World’s Most Expensive Whiskeys
Its lights out for Oil and Gas Exploration, says World Bank »
Leave a Comment
Close