Creating a system that can remove plastic waste from the world’s oceans is what The Ocean Cleanup has been trying to develop since 2013. And finally, the ambitious plan is recording a successful motion that will evacuate the huge problem of plastic waste, beginning with the Great Pacific Garbage Patch.

The Ocean Cleanup, founded by Boyan Slat, a 24-year-old Dutch innovator has led several research expeditions, series of prototypes and hundreds of scale-model tests in hope of developing advanced technologies that could expunge plastic wastes in the ocean. And the efforts have been rewarded with System 001 – a 600-meter long floating barrier attached with a 3-meter skirt launched last weekend as the world’s first ocean cleanup system.

System 001 is reportedly going for a two-week trial to a location 240 nautical miles offshore, after which it would head 1,200 nautical miles offshore, the Great Pacific Garbage Patch to begin full cleanup operation. The Maersk Launcher ship provided for the project by charter holder DeepGreen and A.P. Moller-Maersk on Saturday began towing the system through the San Francisco Bay to its operation destination. 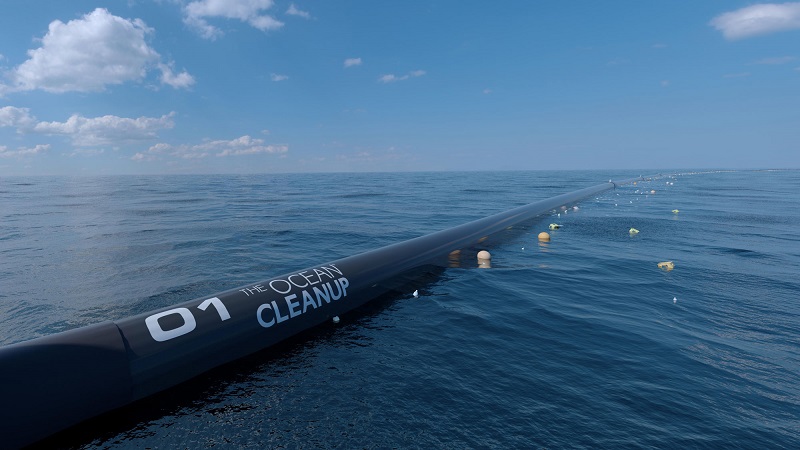 It should be a global priority to stop plastic pollution, which is the major challenge, but cleaning up the already messed ocean is equally necessary.

Wind and waves are the major propellers of the system, which passively concentrate and catch plastic debris through the front. It is designed to skim the ocean surface like a giant Pac-Man, channeling collected debris to its center and to move a little bit faster than the plastic.

The growing volume of plastic waste in the oceans is a huge pollution troubling the world. Much more is the amount delivered every day into the sea, at least 8 million metric tons is relatively the lowest estimate deposited yearly into the oceans. The breaking down process of the deposited plastic debris into smaller pieces enables them to flow and cluster in various ocean regions, where they have made names such as the Great Pacific Garbage Patch.

The organization hopes its cleanup project and arrays of plastic collection would help to remove large debris from the ocean. If the project goes successful, the first system would be able to clean as much as 50 tons of plastic within the first year. Slat and colleagues said their forecast suggests that the system could remove as much as 50% of the plastic garbage in five years of operation if it deploys full 60 arrays.

However, the system 001 is still untested, even the crew members are not fully sure if the technology would work as proposed.

The bold step taken by The Ocean Cleanup to confront an ugly challenge that seems impossible to deal with will serve as an inspiration for many, though many (who study plastics) have criticized the effort.

It should be a global priority to stop plastic pollution, which is the major challenge, but cleaning up the already messed ocean is equally necessary, Slat said. He also knows that the scientific community and the world are both witnessing as The Ocean Cleanup takes up the first real test.