The Must-Haves of Beer, Steak, Lego and Game Consoles… 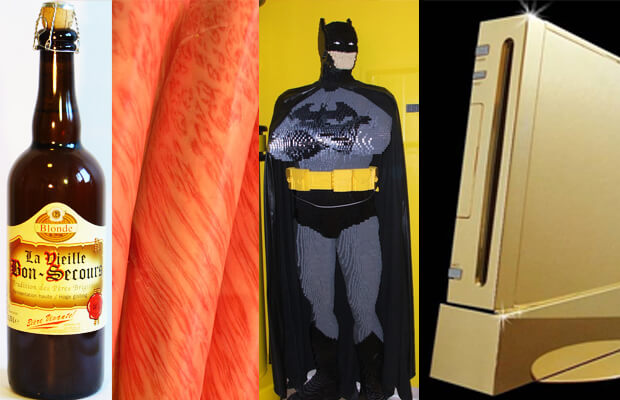 The Must-Haves of Beer, Steak, Lego and Game Consoles

Interesting mix ? Sure. Because that’s the complexity our readers present us with, and the variety we need to address.

So this month’s “prized possessions” span across the world’s most expensive beer, steak, lego set and game console. Lets find out which ones rank in our must-haves list (if you’ve got a few hundred thousand to spare of course…)

Benjamin Franklin once said, “Beer is proof that God loves us and wants us to be happy.” So how much happiness does the world’s rarest and most expensive beer present ?

Brewed by Belgian firm Caulier since 1995, a bottle of Vieille Bon Secours, touted as being the most expensive beer on earth, costs around £700 or £32 a pint.

The 12 litre bottle of Vieille Bon Secours serves up to 50 people and has an alcoholic volume of 8 per cent with the beer’s ‘complex’ taste being derived from citric, caramel and toffee flavours with an undertone of liquorice and aniseed.

How could we resist pairing up the world’s most expensive beer with one of the drink’s best companions?

The Japanese beef industry’s best gift to the world, the Wagyu steak, one of the world’s most expensive steaks, supersedes any western high-end beef. The Wagyu cattle, reared for the world-renowned Wagyu meat, are known worldwide for the marbling characteristics of the beef they produce, its increased eating quality through a naturally enhanced flavor, tenderness and juiciness, and thus a high market value.

Amongst these, the Kobe variety especially are the rarest and most-sought after, with these cattle allegedly having been reared by feeding them only beer and massaged by hand to ensure a tenderness and marbling beyond compare.

Little wonder, then, that the Wagyu meat takes up top spots on high end steak menus around the world.

As an indication of exactly how expensive this steak is, an eight ounce cut of Wagyu steak at Wolfgang Puck’s Beverly Hills restaurant would set you back by a cool $160, while a full Wagyu rib eye served at New York City’s Craftsteak would cost a cool $2800

Got a spare $400,000 sitting around that you don’t know what to do with ? And you’re also crazy about games consoles ?

This is your “Supreme” dream come true then.

The Nintendo Wii Supreme edition, another super-glitzy piece of work by Stuart Hughes of Goldstriker, priced at a very dear $485,920, is coated in 2.5 kilograms of 22k gold.  With front buttons decorated with 78 quarter-cut diamonds weighing in at 19.5 carats, this super-luxurious console reportedly took six months to produce.

Other Supreme-ized products by Stuart Hughes’, known world-over for glam-ming up gadgets, include the $3.2 million iPhone 3GS, the $2.25 million PrestigeHD Supreme Rose edition and the $1.85 million Bang & Olufsen Beosound Speakers among others.

This man’s love for all that shines will never stop surprising us.

For all you AFOLs (Adult Fans of Lego) out there, this is an absolute must-have.

A 6-feet tall, 500 pound Batman, sold by legendary toy retailer F.A.O. Schwarz at a mind-boggling price of $27,000, has been designed by Lego so that it can be shipped in three separate pieces, also making its construction easier.

One of the world’s most recognized toy brands, Lego, since it began producing plastic bricks, has designed and produced thousands of sets with a variety of themes, including town and city,  space,  robots, pirates,  trains, Vikings, castle, dinosaurs, undersea exploration, and wild west.

The $27,000 Batman lego set though absolutely takes the cake. Also the biggest Lego Batman in the world, this piece was constructed by thousands of kids and adults who came into the shop over a period of two days, and helped put this world-first together.