The Indian Grand Prix; A formula for success 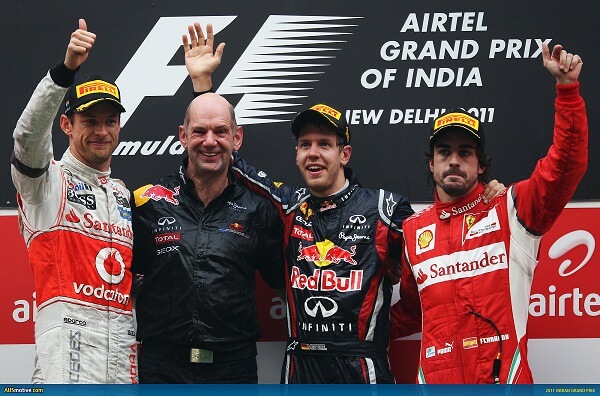 Following the processional race at recently developed Buddh International Circuit on Sunday, the participating teams have been quite gushy in praising the arrangements and the circuit at the Indian Grand Prix. The Circuits had a character of long straights and flowing terrain which made them fall in love with the track. Bernie Ecclestone, a well known British Business Magnate and the CEO of Formula 1 doubted on the completion of the circuit before arriving to India. Upon arrival and at the end of a keen observation, he looked quite impressed while he said “Super, The track is super.”

A crowd of 95,000 Grand Prix enthusiasts gathered to see Sebastian Vettel  reign over a race that wasn’t much about overtaking  or crashes. Jenson Button who finished second earned quite some compliments from the public. “I loved the whole experience this weekend,” Button said. “And I think every driver will be excited about coming back here because it’s such a phenomenal circuit; fast and flowing with a bit of everything. It gets a big tick from me. The Indian people have really welcomed us to their country; I’ve never seen so many people smiling before. And the crowd has been wonderful. I hope that Formula 1 grows in India in the future and that we get an even bigger crowd here next year.”

Vettel’s praised the Indian people and appreciated their approach towards life.

“It’s a very impressive country here, very different to what we know in Europe, but very inspiring,” he said. “If you keep your eyes and ears open, you can learn a lot from the way the people handle things here. It’s a big country with a lot of people, but they are happy and enjoy life, which is what it’s all about. At the end of your life, it’s friendships, emotions and thoughts that you take with you, rather than what’s in your bank account. So, even though people don’t have a lot here, they are a lot richer in many ways and we can learn from that. It’s been a great race, a great event and the circuit is fantastic, so thanks a lot to all the people in India.”

Lewis Hamilton was also amongst the ones who were really happy about the hospitality and warmth received from the Indians. He was heard saying: “The Indians did a fantastic job this weekend, the track was great, and we’ve been treated so well here, we’ve been treated like kings so I’m really grateful for that.”

Michael Schumacher who has seen a lot of races join the Formula One calendar throughout his glittering career too expressed his feelings towards the well organized event: “To the organizers of the first Indian Grand Prix, I would like to send a big compliment; I’m sure that I am not the only one to say that this was a very positive debut.”

Apart from the Drivers, the Team members also carried big smiles with the Head of motorsport at Mercedes, Norbert Haug calling it as a remarkable event. He said, “This inaugural Indian Grand Prix was a remarkable event. This is a fantastic and challenging race track, and saw packed grandstands and great enthusiasm from the fans. Formula One could not have wished for more during the first race in a new country. So a big thank you to the organisers, the Jaypee Group, and to Bernie Ecclestone and FOM, who have worked very hard to make this new event happen.”

With all the praises and appreciation, there was someone who didn’t really carry happy memories home. Felipe Massa had to leave the circuit following a clash with Hamilton during the race: “I will try and forget this trip to India as quickly as possible, but that will be absolutely nothing to do with the country!”

The race attracted a host of celebrities, who flocked at the paddock area since morning and were also seen interacting with team officials and drivers. The Bollywood Indian Cinema star Shah Rukh Khan, who was amazed at the mean machines, spoke to the media: “It’s lovely to be here…The weather is perfect for the race and I am here to support the Indian team (Sahara Force India).”

Red Bull’s Mark Webber and Ferrari’s Fernando Alonso were further behind. Former champion, McLaren’s Lewis Hamilton, could only manage a 7th position finish after yet another clash with Felipe Massa of Ferrari who had to leave the track. The Mercedes duo of Nico Rosberg and Michael Schumacher finished quite ahead of Hamilton, at the sixth and fifth spots respectively.

Its was Vettel’s 11th victory of the season and he is now on his way to equal Schumacher’s 2004 record of 13-wins in one season.

“Yes boys, we did it,” shouted Vettel after the God of Cricket Sachin Tendulkar waived down the chequered flag. “First Indian Grand Prix, great job!”