The High with a Soul: Swedish Vodka ‘Karlsson’s Gold’ 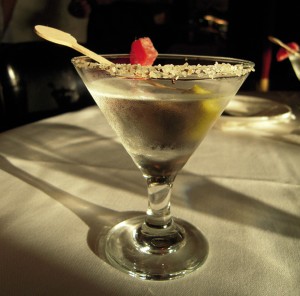 The High with a Soul: New Swedish Vodka ‘Karlsson’s Gold’

What do you think will be the fate of Karlsson’s, a start-up Swedish vodka brand, when its difference and essence is based in ‘going against the grain’, so to speak, of vodka’s obsession with purity ?

Some global beliefs that have become pre-requisites while judging any vodka as being ‘good vodka’ are that the drink needs to be flavourless and colourless. Very much like the famous Swedish previously state-owned brand, Absolut. So how does the very strongly-flavoured Karlsson’s Gold fit in here ?

Vodka: Then and Now

Every year some 200 vodka brands hit the market worldwide. There’s one that comes bottled in a glass skull, another that is flavored with smoked salmon, and yet another that is dyed black. But underneath the marketing and food coloring, almost all vodkas are the same. They’re made from grain, usually wheat or rye, and distilled until the taste and color are removed. Some are better than others, but there’s no art to the process: the better the ingredients and the more thorough the distilling, the higher the premium.

Only two of the 200 vodka brands introduced each year live much beyond their first birthday. The question is, will Karlsson’s buck the trend?

Before the 1960s very few people outside the “Vodka Belt”— Scandinavia, Russia, the Ukraine, Poland—drank the stuff at all, and regional differences predominated. Swedish vodka was made mostly from potatoes, while grains dominated in the steppes. At this point purity not being so important, underlying flavors for the various brands came through in the final product: vodka made outside Malmo tasted different from vodka made outside Stockholm, let alone Warsaw.

Absolut revolutionized this tradition when this state-owned brand from Sweden got a makeover and started selling globally. Part of its marketing campaign, devised by the legendary Hans Brindfors (who later helped make IKEA a household name), was to emphasize purity over variety. The master blender, Borje Karlsson, switched the recipe from potatoes to winter wheat, which imparts a cleaner flavor. Mr. Brindfors dressed it up in its now-iconic bottle, hiring artists to design ads that, within a few years, became de rigeur on the walls of college dorm rooms across America.

Absolut remained state-owned until 2008, when Sweden sold the brand to Pernod-Ricard for $9 billion. In the meantime, Absolut became one of the largest and most-recognized liquor brands in the world and the definition of high-quality vodka, averaging over 120 million bottles in worldwide annual sales.

Mr. Brindfors and his marketing colleagues Olof Tranvik and Peter Ekelund were long gone by then. But a few years ago the trio got back together to give vodka-making another go. Enter – Karlsson’s Gold 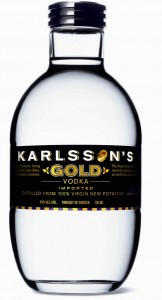 Mr. Ekelund, who works for a private equity firm, also owns a farm in southern Sweden, and naturally, understands what fluctuating food prices can do to small-time agriculture. So he approached his neighboring potato farmers with a plan: what about, instead of storing their excess produce, distilling it?

They brought in Mr. Karlsson, the now-famous “father of Absolut,” to develop a recipe, and a few years later—backed by Mr. Ekelund’s fundraising, Mr. Tranvik’s marketing skills, and Mr. Brindfors’s branding genius—Karlsson’s Gold was born.

Karlsson’s is in many ways the opposite of Absolut. “Success for us,” Ekelund was reported as saying, “will be to sell 100,000 cases in five years”—or about 240,000 bottles a year, or about two-tenths of 1 percent of what their former brand sells annually. “We actually have real physical limitations,” Ekelund says. “Our fields could produce a maximum of 400,000 bottles annually.” Mr. Brindfors’s bottle is short and stout, shaped something like an oversized glass hand grenade. And Karlsson’s marketing is entirely word-of-mouth—no Andy Warhol ads this time. The company has just 15 employees, and the participating farmers are all shareholders.

More important, Karlsson’s runs against the grain, so to speak, of vodka’s obsession with purity. This is a dirty drink: Mr. Karlsson uses a blend of five potato varieties, chosen for their flavor as well as their terroir. Yes, terroir: like grapes, potatoes bear the imprint of soil, moisture, water quality, and temperature. Karlsson’s even brags that the region where the potatoes are grown, Cape Bjäre, “is to potatoes what France’s Bordeaux region is to grapes.” Perhaps. In any case, the result is a vodka with flavor—and not mandarin orange or salmon, but pleasantly nutty, spicy notes derived from the potatoes themselves.

Karlsson’s will never replace Absolut, a fact that the three backers seem to relish. Its distinct flavor makes it a poor base for most vodka-friendly cocktails, though Mr. Ekelund likes it in a Bloody Mary. The best way to drink it, says Mr. Tranvik, is like whiskey: at room temperature, on the rocks, or with water. A bit of fresh-cracked pepper compliments it nicely. And then do what perhaps no one in America has done with a glass of vodka in 30 years: sip.

That’s not likely to win over the vodka-and-Red-Bull crowd any time soon, though Karlsson’s isn’t interested in the mass market—for now. “There’s no illusion that we don’t have a long road ahead of us,” Mr. Ekelund says. “But then, we believe that vodka will move to craft products. Otherwise, it gets boring. People like different things. You see that in beer—so why would someone behave differently when it comes to his liquor?”

Christy Gren
Christy Gren is an Industry Specialist Reporter at Industry Leaders Magazine she enjoys writing about Unicorns, Silicon Valley, Startups, Business Leaders and Innovators. Her articles provide an insight about the Power Players in the field of Technology, Auto, Manufacturing, and F&B.
« Bike Riding to get even more sustainable in the Netherlands with Solar-Paneled Cycle Path
Life’s Better with 3D! LG to unveil ‘world’s first 3D phone’ at MWC 2011. »
Leave a Comment
Close