The Five Largest Beer Companies in the World

These five largest beer companies control more than half of the world’s beer sales. Interestingly, the hierarchy is very convoluted with these big five owning or co-owning several hundred small beer companies.

The global beer market which is valued at $685,354 million by 2025 is to a great extent fueled by the increasing number of small craft breweries that are mushrooming every year. According to Brewers Association, in 2018, craft beer constituted to 13.2 percent of the total beer sales volume in the US.

But globally, the top five industry leaders in the beer industry- Anheuser-Busch InBev, Heineken, China Resources, Carlsberg, and Molson Coors; control half of the beer market.  And while craft beer’s share is on the rise, it represents a small percentage in the global beer market.

Which is the largest beer market?

China is the largest beer market in the world with 27 percent, followed by the US (13%) and Brazil (7%). The recent global beer trend shows a declining beer consumption in traditionally large markets like Australia and Germany. The developing countries such as India (1%), Mexico (4%), and South Africa (2%) have taken their place. 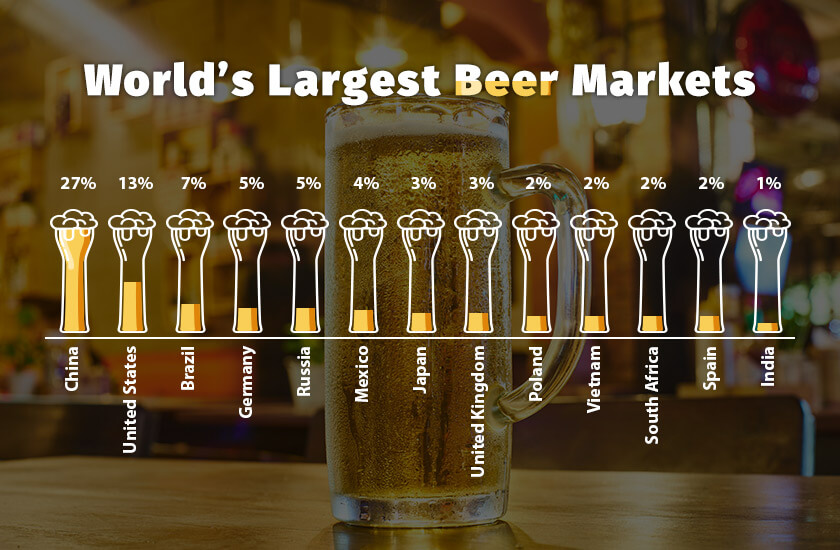 Anheuser-Busch, with its sub-brands Bud Light and Budweiser, controls nearly 27 percent of the global beer market. Heineken with 10 percent share and China Resources with a 6.1 percent share are in the second and third position.

We mapped out the five largest beer companies in the world with their sub-brands to showcase how business is brewing in the world of beer.

The largest beer company by market share and sales volume, ABI strengthened its leadership position by acquiring SABMiller in 2016. However, owing to competition regulations in China, it had to sell its sub-brand ‘Snow’ to its competitor China Resources. Snow is the most popular beer brand in China and the best-selling beer brand in the world. Despite losing Snow, ABI continues to maintain its position as an industry leader in the beer market with nearly $54.6 billion in yearly revenue.

Anheuser-Busch InBev is the parent company of several best-selling beer brands like Corona, Stella Artois, Beck’s, Hoegaarden, Bud Light, and Budweiser. Budweiser, considered to be the most popular beer brand in the world, is gearing up for the biggest IPO launch of 2019.

Heineken consolidated its stature as one of the largest beer companies in the world by acquiring stakes in United Breweries of India and CRH Beer of China. Tapping on the growing cannabis market, Heineken also launched a THC-infused beer in 2018 called Lagunitas.

As of 2017, this Dutch beer company owns 165 breweries in over 70 countries and produces 250 beer labels. These beer labels include Tecate, Amstel, and Tiger Beer, among others.

China Resources Snow Breweries, a beverage arm of China Resources, is known for its ‘Snow’ beer. Snow beer with 20 percent market share in the Chinese market is the largest beer brand in China. Snow beer overtook Bud Light in 2009 as the world’s best-selling beer brand by volume. China Resources sold as estimated 101 million hectoliters of Snow in 2017. In comparison, Budweiser which is currently on the second position of the best-selling beer brands sold just 49.2 million hectoliters.

This beer brand, though a ubiquitous name in China for its mass production and cheap price, is not very well-known in other countries. Other labels included in China Resources beer portfolio are Blue Sword, Green Leaves, Huadan, Huadan Yate, Largo, Löwen, and a few more.

Carlsberg, third in the top five list of largest beer companies has nearly 500 beer labels in its belt. Though the green bottle with Carlsberg’s flagship lager is the most well-known, many other popular beer brands in the US and Europe are owned by Carlsberg. These include Tuborg, Somersby cider, SKOL, and Baltika – the most popular beer brand in Russia. Carlsberg commands a 5.9 percent share in the global beer market.

Coors merged with Molson in 2005 to create Molson Coors Brewing Company, the world’s fifth largest beer company. Later Molson Coors entered into a joint venture with long time competitor SABMiller and created MillerCoors. Today, MillerCoors is the second largest brewing company in the US after Anheuser-Busch. Popular beer brands in MillerCoors portfolio include Miller, Coors, Lech, and Blue Moon.  This brewing company has a 4.9 percent share in the global beer market.

Christy Gren
Christy Gren is an Industry Specialist Reporter at Industry Leaders Magazine she enjoys writing about Unicorns, Silicon Valley, Startups, Business Leaders and Innovators. Her articles provide an insight about the Power Players in the field of Technology, Auto, Manufacturing, and F&B.
« Online Advertising will Account for More than 50% of Global Ad Spending in 2021
Famous Architects of our Time – Interview with Ben Van Berkel »
Leave a Comment
Close