The Art of Architecture Inspired by Biology

“Merely by focusing on the effort of transforming mechanical systems into a more efficient prospect, we cannot do net-zero energy,” says Doris Kim Sung, biologist-turned-architect who sports a pixie cut with a radiant smile to match, and prefers dressing up head to toe, where the color black dominates from her scarf to her Chanel boots. You could either start with creating better sensors to construct a smart building. Or, you could take a hint from Doris Kim Sung, who drew from a scientific background to create more eco-friendly and a smarter alternative. The choice is yours. The alternative hangs around extravagant, dynamic, and breathable exteriors of a building, which can efficiently regulate the building’s temperature. The regulation, though, takes place in a way how human skin regulates the temperature of the body – requiring no controls or switches and consuming zero net energy. 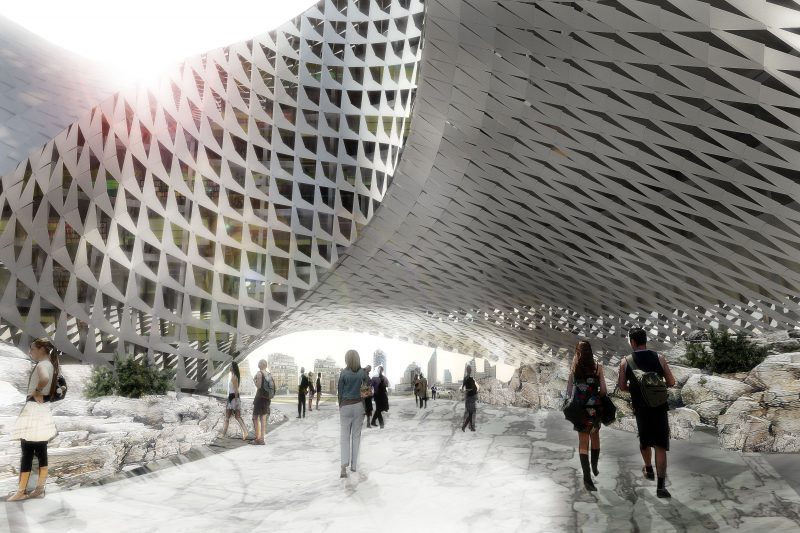 Further, Doris Kim Sung, principal of dO|Su Studio Architecture and University of Southern California’s assistant professor, continues, “What I propose is that our building skins should be more similar to human skin, and by doing so can be much more dynamic and responsive.”

The biologist-turned-architect thinks buildings are quite lame. And, adding more to the misery, she feels they’ve only gotten lamest over the years. Buildings in previous times had insulating, thick walls with small windows, which restrained the heat passing between the exterior and interior, maintaining a convenient temperature. But the remarkable invention in the 1930s – plate glass, allowed massive floor-to-ceiling windows that eventually lead to a hefty reliance on giant, energy-guzzling heating, and air-conditioning systems.

While the glass use in skyscrapers has proliferated, modern skyscrapers are closed off from the surrounding environment in a much-closed manner. Since its inception, the usage of artificially and closed, controlled interior environments have caused massive strains on the resources of the planet. They have made the buildings experientially homogenous, and not forgetting the sickness caused i.e. over-reliance on the system of air-conditioning. Modern humans learn, play, work, and live in towers with exteriors that resemble wallpaper. The occupants feel no heat on a hot summer day, nor do they feel any cold despite it’s snowing outside. Sure, comfort is necessary, but such craziness for comfort has driven more and more technology of advanced air-conditioning constructing building, which no longer opens up to the seasonal changes of nature. No matter what the environment is outside, the interiors remain the same throughout the year.

One of the most fundamental and ancient notions of architecture is the “breathable skin”. The practice of allowing natural, fresh air to flow through a building is very old. It dates back to the ancient Egypt’s wind catchers and similar structures located in the Middle East. Technological advancements, rapidly increasing building heights, and growing environmental awareness of the society has spurred exciting, fresh developments in the construction and design of sustainable architecture that actually breathes.

Enveloping Strategies for ‘US’ Humans- We’re mortals after all

We need air, fresh to be precise. Surely, we won’t be getting any if we continue to stay jam-packed inside our fully air-conditioned office buildings or homes. Now is the time when we need something natural, pure, and fresh. Enter the building skin that can breathe. You know, the sustainable architecture surrounding the breathing façade features various envelope strategies for buildings – the externally ventilated double wall, the internally ventilated double wall, and the naturally ventilated atrium enclosure.

It’s an excellent example of naturally ventilated atrium enclosure. The 358-meter sky-high skyscraper in China’s Wujiang has used digital aerodynamic modeling for its design. The 42-story central atrium with windows acts like ‘lung’ for the skyscraper. The windows are operable and the construction is designed with a sole focus to fetch the advantage of prevailing winds.

Sustainability concerns in China inspired the architecture of this exemplary Nanjing, China-based skyscraper promoting externally ventilated double wall. The faceted form of the tower, which resembles a traditional Chinese lantern, is an evolution of incorporating mechanical, structural, and architectural systems. The curtain wall comprising of double skin helps reduce mechanical cooling by almost 20 percent. The benefits of this sophisticated envelope include enhanced HVAC performance, increased convenience for occupants, and lower operational charges.

Macau’s ‘Armored Block’, Morocco’s ‘Old-Fashioned Pen’, and Dubai’s billion-dollar ‘Coconut’ are a few wonderful yet wacky examples of architectural constructions on the rise. Also, this is not the end as there are plenty more in the line. Let’s unwind the mysteries behind the marvel of sustainable architecture, the one with breathable skin.

The skyscraper seeks to transform the static typology by reutilization of the traditional tent concept. How? This is be done by using the breathable skin, which adapts multiple environmental settings efficiently without resorting to the system of air-conditioning. Urban Tent Skyscraper’s design is conceived as resembling human skin with a porous fabric membrane on the building’s exterior. It’s more like epidermis.

Consequently, the occupants can prefer to be in various temperatures and comfort that also creates an opportunity for co-existence of various plants and trees. Individuals can enjoy the winter by feeling warm inside the warmer interiors of fabric rooms. The exterior and interior fabric function together in a manner, which creates various environmental conditions and micro-climates on the interior of the building such that the tough external environment is automatically filtered into the space of the building in various amounts.

In a site like Seoul, The Urban Tent is visualized to work quite well. The capital city of South Korea is known to have four extreme conditions, warm springs, chilly autumns, hot summers, and freezing-cold winters respectively. So to adapt to such radical changes, the skyscraper is capable of closing and opening like the mechanism of a traditional tent, to change not only the tower’s macro-climate, but also micro-climates. The inner and out fabric walls of the tower can open up in summer so that the process of natural ventilation can take place. Depending on the level of floor requirements, the interior rooms can be opened or closed during autumn and spring. Similarly, in the same mechanism, the fabric of the tower is fully closed in winter with an additional solution of ice-capturing in order to boost the insulation capacity.

The architecture is a fresh spatial experience of evanescent beauty. Like nature, one could say. It warps with the wind, captures shadows, and changes with sunlight. This kind of design, as we imagine, will offer various types of experiences and activity to occur in the routine life of the residence as individuals are moving closer to Mother Nature. Even in Urban lifestyle.

Doris Kim Sung is one among the architects’ cadre who have started a paradigm shift from traditional, static buildings to modern, smart ones. These are the buildings, which respond to external and internal environments. In the race to architectural sustainability, Sung is the only one. Morphosis Architects based in New York, for instance, has designed homes for occupants in flood zones such as New Orleans, which rise in response to elevating water levels.

With air-conditioning and heating amounting up to half of energy usage of home, we need to make a wise decision – and so do our homes. Temperature regulation is merely the start. “If we’re really smart, we’ll design building skin to sweat, to have goosebumps, to be waterproof,” Sung concludes. “It’s a different way to see architecture. We’re on the cusp of something new.”

Maybe this element of architecture should become the next project of Alphabet’s Nest Labs. It’ll be highly profitable in future.

In a written statement, FDA Commissioner Robert M. Califf stated, “Today’s action is further progress on the FDA’s commitment to ensuring that all e-cigarette and electronic
36 mins ago

Commonly used generic drugs are available at a 15% markup, plus a $3 dispensing fee and $5 shipping fee. In an interview with PBS News, Cuban told the host that the Mark Cuban phar
2 hours ago

According to a written statement issued by the company, they have already deployed $2.5 billion to fund decarbonization technologies in the US, the UK, Germany, and North America.
8 hours ago