A new BMW M2 has been a subject among fans of the German automaker and now they don’t have to wait any longer. BMW has just unveiled the 2019 M2 Competition with thrilling news. It’s powered by the M3/M4 engine from its bigger brother.

The S55 engine in the car is a 3.0-litre twin-turbo online-six that generates 405 hp and a torque of 406 lb-ft. Compared to the older version, which prides a regular BMW engine that’s modified; not a powertrain designed by M division, it’s a mammoth boost of 40 horsepower and 63 lb-ft. The M2 Competition’s engine is laden with a standard 6-speed manual transmission, with options for a 7-speed dual-clutch.

On 60 mph, the M2 Competition’s manual gearbox is quicker than the standard car with 0.1 seconds, the dual-clutch model manages the drive even faster; in 4.0 seconds and the manual car covers it in 4.2 seconds. Its lightweight forged crankshaft is important for the additional 600rpm. Lichtbogendrahtspritzen (sounds extremely German) is the material sprayed to coat the cylinder walls.

The engine is lubricated by an advanced wet-sump oil system which keeps oil the extra pump using a baffle. With this system, oil starvation is prevented even in hard cornering. A complete package of the M4’s cooling system which uses a large radiator with 2 smaller side units is fully deployed. It also features an engine-oil cooler and transmission-oil cooler for the dual-clutch models. 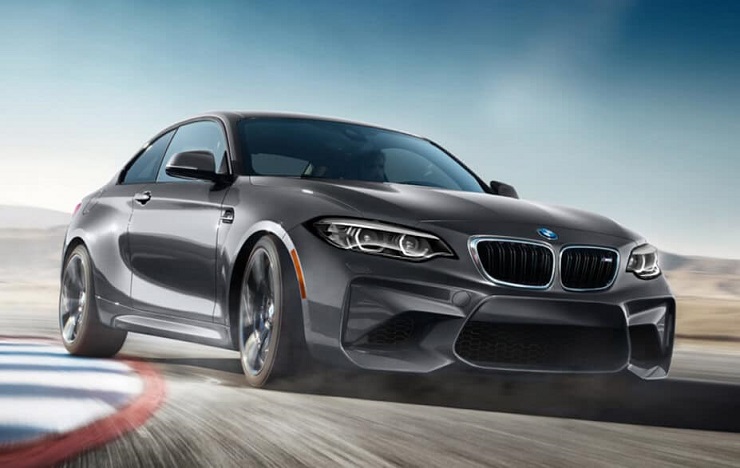 The 2019 BMW M2 Competition’s engine is laden with a standard 6-speed manual transmission, with options for a 7-speed dual-clutch.

BMW M engineers did not create the M2 competition by just installing a hotter engine in a regular M2, that’s not all the job done here. The chassis featured a host of improvements to harness most of the added power. Both axles (front and rear) are those engineered for the M3/M4, same with the carbon-fiber strut brace under the hood. And the rear frame is fitted to the body with no rubber bushings for extra stiffness.

In terms of electronics, the M2 features a recalibrated stability control systems, power steering and the electronic locking differential for the competition. You can now configure the steering weight and throttle mapping separately, as is shift speed for the dual-clutch models. Using two M buttons, you can activate your favourite driving modes combinations.

The interior arrangement of the M2 Competition is slightly different. But most things are the same – a red engine-start button and new bucket seats. The rear trunk lid with a “competition” badge and lager kidney grilles are the most notable changes.

BMW is yet to announce the pricing; expected to be before the launch of M2 Competition this summer. We think the vehicle would be a little pricier than the $54,500 M2 available now. Consumers still interested in the regular M2 will be wise to get them now before it goes out of stock after the Competition launch.

Anna Domanska
Anna Domanska is an Industry Leaders Magazine author possessing wide-range of knowledge for Business News. She is an avid reader and writer of Business and CEO Magazines and a rigorous follower of Business Leaders.
« Strokes of Genius: World’s Most Expensive Watches
Eni wants to turn Italy into a European Gas Hub »
Leave a Comment
Close