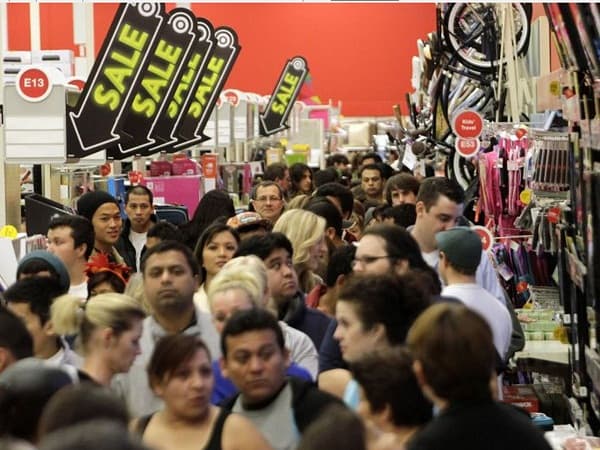 Thanksgiving traditions have been evolving, adding to the list of usual activities one more thing namely Thanksgiving shopping. Retailers know how to take use of the needs and trends therefore they decided to open the holiday shopping season on Thanksgiving.

Americans did not let down retailers as they rushed to stores and waited in lines on the Thanksgiving evening, Black Friday and the weekend. According to data, the entire holiday shopping weekend saw an increase of approximately 10 percent in shoppers, compared to 2011.

On the 25th of November, the National Retail Federation reported the findings of its Thanksgiving weekend survey of American shopping activity. The survey showed that retailers won the battles as they lured customers to their shops. According to the findings, over 35 million Americans decided to shop on the Thanksgiving evening, which was a 20 percent jump compared to the 2011 Thanksgiving shopping.

Data showed that over the entire Thanksgiving shopping weekend almost 250 million shoppers visited either shops or websites, or both. That is an increase of over 9 percent, compared with 2011. But American shoppers did not disappoint even when it came to spending. American Holiday customers spent an average of nearly $425 over the Thanksgiving shopping weekend, which is just the opening of the holiday shopping season. In 2011,  retailers saw the average American holiday customer spend nearly $400 during the same period. Total spending over the Thanksgiving weekend frenzy reached roughly $59 billion, up nearly 13 percent from 2011.

According to data, Black Friday sales alone accounted for as much as 47.5 percent of total sales. Thanksgiving sales totaled about 27 percent. It is worth underlying that about 80 percent of American customers, who took part in the Thanksgiving shopping weekend frenzy, were basically practical in making household purchases.

However the findings of the survey showed that the Thanksgiving shopping weekend was successful and retailers took advantage of the opening of the holiday shopping season. Their efforts to attract customers to their shops in spite of the weak job market, taxes increases and budget cuts worked out. Retailers are aware of the importance of the holiday shopping season as during that period they can earn approximately 40 percent of their annual revenue.

American shoppers did not disappoint either when it came to the online shopping as much of the Thanksgiving weekend shopping took place online. Many customers decided to shop online just to take advantage of Internet-only special deals which started early Thursday morning. According to the findings of survey, the average American shopper spend roughly $172 online during the Thanksgiving shopping weekend, which reached about 41 percent of the total spending, up from approximately 38 percent in 2011.

Certainly these good results are partly caused by the retailers’ good job of combing their physical stores with online channels which allowed customers to shop online. Amazon.com Inc. was the most popular on Black Friday.

According to analysts’ estimates, 2012 holidays sales are predicted to grow roughly 4.1 percent from last year. In 2011, sales growth was about 5.6 percent. The National Retail Federation underlines that overall holiday sales are expected to reach approximately $586 billion. The average American customer is to spend roughly $749 this holiday shopping season.

Anna Domanska
Anna Domanska is an Industry Leaders Magazine author possessing wide-range of knowledge for Business News. She is an avid reader and writer of Business and CEO Magazines and a rigorous follower of Business Leaders.
« Rise in Bad Loans Prompts Reform Plans for Wenzhou
Canadian Mark Carney to guide Bank of England toward better days »
Leave a Comment
Close