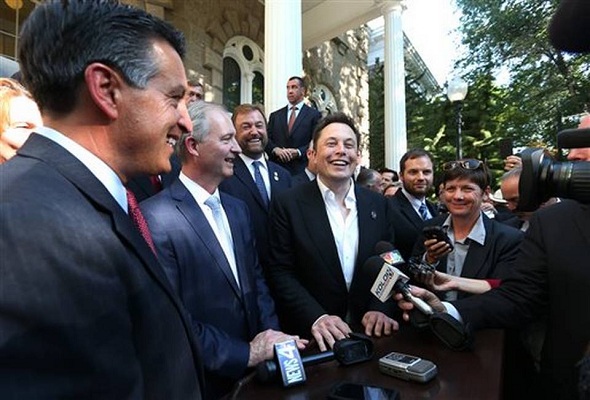 Tesla Motors CEO Elon Musk, right, and Nevada Gov. Brian Sandoval, extreme left, at a press conference where Nevada was announced as the new site for a $5 billion car battery gigafactory, at the Capitol in Carson City, Nev., on Thursday, Sept. 4, 2014.

The 43-year-old Silicon Valley entrepreneur said his firm was making rapid progress in the race against rivals such as Google and Vovlo, to create a driverless car, which could modernize transportation and reduce death rates due to accidents.

“The overall system and software will be programmed by Tesla, but we will certainly use sensors and subcomponents from many companies,” Musk told reporters in Tokyo Monday. “I think in the long term, all Tesla cars will have auto-pilot capability,” added Tesla’s 43-year-old head, sounding as optimistic as always.

Currently, there are no self-driving cars available commercially in the market. Google’s self-driving cars are not yet legal on Californian roads due to the recent addition of road safety rule where it is obligatory for all vehicles to be equipped with a steering wheel and pedals. Nonetheless, the auto-industry has seen a giant leap in terms of innovation, with features such as self-parking, in recent years with several automakers not so lagging behind Google to come up with their own self-driving cars.

On Monday, Musk additionally said that Tesla plans another partnership with Toyota in the coming years, with a new battery deal, as the current agreement comes to an end. Musk was in Tokyo to unveil the arrival of Tesla’s Internet-connected Model S sedan in Japan. The luxury sedan costs 8.23 million yen ($77,000) and comes with batteries made by Panasonic.

The JV between Tesla and Panasonic on the Model S goes before the arranged joint development of the world’s biggest lithium-ion battery plant – the “gigafactory”, in the US state of Nevada. Tesla will run operations at the $5.0 billion factory while Panasonic will make battery cells for the plant and put resources into equipment and machinery. The plant will employ 6,500 workers directly as well as an additional 16,000 workers indirectly, Tesla said.

Electric car market in Japan as several other nations is developing slowly, impeded by high costs and an absence of lack of locations for electric car owners to charge vehicle batteries. Tesla has been working on the hindrances lately. Tesla recently partnered with China United Network Communications Corp., to build 400 charging stations for electric cars in another offer to push promote widespread adoption of the innovation in China.