Tesla announced it delivered a record 241,000 vehicles during the third quarter.

Tesla’s advent in the auto world upset the long reign of legacy carmakers, which were cruising along raking in high revenues off good sales and making token noises about moving away from internal combustion engines to more sustainable technologies.

The groundbreaking EV production of Tesla shook up the competition, forcing them to look at alternatives and design options to match. It was no longer a matter of just converting their production units to EV and continuing with their hold over the market. The transition to a new technology is complicated, and matching tech with production is not easy.

Forecasts by Bernstein, IHS and EV-Volumes.com for six big car groups till 2024 indicate that Volkswagen is the only legacy carmaker on track that might be able to overtake Tesla for EV production. The others are expected to increase the sales of their EVs, but matching Tesla will be difficult.

Most are behind Tesla in some components by six years. The chip crisis has further proved the distance. Tesla has so far been the only manufacturer to increase production post-pandemic.

Tesla announced it delivered a record 241,000 vehicles during the third quarter. Matching these numbers is going to be difficult, according to Bernstein, IHS and EV-Volumes.com. 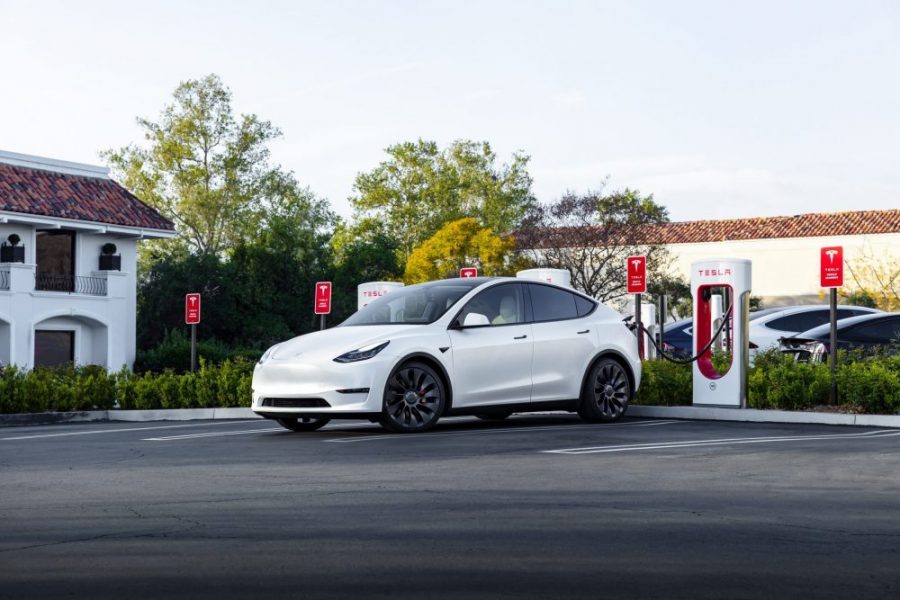 Tesla’s Model 3 is now the best-selling vehicle in both Europe and the UK.

Last month, Elon Musk boasted that Tesla’s vehicle production had increased by an average of 71 per cent a year over the past half-decade. “I feel confident of being able to maintain something like this, at least above 50 per cent for quite a while,” he said.

Tesla is producing about 1 million a year, and its factory near Berlin is just coming online. Compared to that, Ford’s EV production was less than 2 per cent of Tesla between 2017 and 2020. This year the production has improved with the launch of its Mustang Mach-E. Its 2021 production rate is 83,000, or 10 per cent of Tesla’s, according to Bernstein.

Ford raised its forecast and said it would produce 600,000 EVs a year by the end of 2023, which is still lower than Tesla. Berstein says that even this number is ambitious for the company, and it would be able to produce maybe 450,000.

Tesla’s Model 3 is now the best-selling vehicle in both Europe and the UK.

In an effort to catch up, legacy carmakers are announcing tie-ups with electric vehicle start-ups. Ford picked up a 12 percent stake in start-up Rivian. Earlier, Ford planned to manufacture an EV using Rivian tech, but now they have abandoned the idea citing production difficulties and a strategy change.

Volkswagen’s Herbert Diess recognizing the threat of Tesla, laid out a plan to “leapfrog” Tesla by 2025, touting cost advantages in scaling up production that would let VW build EVs “for millions, not for millionaires”. But the chip shortage is sure to affect this ambition of VW.

“This year isn’t the end of the world but it’s also not quite a reason to celebrate,” said Bernstein’s Arndt Ellinghorst, who expects VW Group to outsell Tesla in EVs by early 2024.

BMW and Mercedes, the world’s leading luxury carmakers by volume, are way behind in their efforts. Their combined production of EVs is less than one-fifth of Tesla’s this year. A major reason for this lag is that neither want to phase out their high margin combustion engine cars, which still are cash machines.

Diess of VW concedes Tesla’s lead in the EV race and for setting the standard for production targets in this segment.

Christy Gren
Christy Gren is an Industry Specialist Reporter at Industry Leaders Magazine she enjoys writing about Unicorns, Silicon Valley, Startups, Business Leaders and Innovators. Her articles provide an insight about the Power Players in the field of Technology, Auto, Manufacturing, and F&B.
« The Growing Popularity of Lab-Grown Diamonds
Athenahealth on the Verge of being Acquired by Bain Capital, H&F »
Leave a Comment
Close

San Francisco braces for the likely arrival of the new Covid-19 variant known as Omicron. The latest variant has a reproduction rate of two.
49 mins ago