Tesla to Make Make a Profit this Year –Analyst

Tesla celebrates its 8th-year anniversary as a public company; it may also be marking a milestone for profit. Despite Tesla’s long years in business and a nearly 2,000 percent increase in its share prices, the company is yet to declare a profit.

However, Jamie Albertine an automotive analyst forecasts Tesla to make a profit in the next two quarters, according to CNBC. As quoted on Friday edition of “Power Lunch,” Albertine said “Based on what we’re seeing in the production trajectory, we think they [Tesla] will be profitable on a non-gap basis later this year. We think we’ll be testing $385 target price, on the way to the all-time high of $389, within the next two quarters.”

Friday commemorates Tesla’s eight-year anniversary as a public company with its stock price skyrocketing to 2000 percent. Ab-initio Tesla shares stood at just $17 on its debut Nasdaq trade on 29 June 2010, by Friday, the shares had shot high to around $345, a big leap in stock price.

Tesla is yet to have steady annual earnings, having squandered nearly $2 billion the previous year and expended about $3.4 billion in cash after capital investments. But Jamie Albertine said: because of the public perception about investors like Tesla CEO Elon Musk as an innovator, Tesla has surpassed any other automobile manufacturing outfit on earth in the significant demand rate, as regards to reservations for a vehicle. 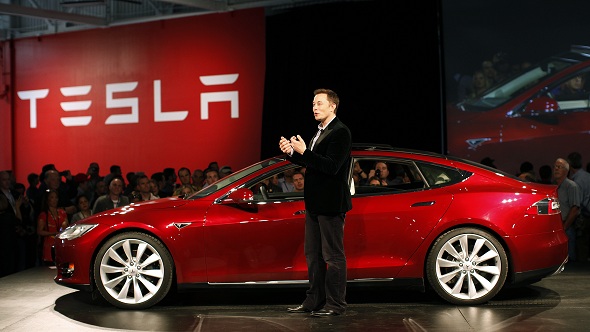 Musk with the Tesla Model S in Fremont.

In his forecast, Trip Chowdhry, managing director of equity research at Global Equities Research, has predicted that this year, Tesla’s revenue will be within $20 billion range. Chowdhry on Friday in his words on “closing bell” said “People are buying Model 3’s without even test driving them” Chowdhry argued that people don’t usually buy products worth more than $50,000 without driving, feeling or touching them. But that’s a phenomenon Tesla has broken. He also said that Tesla would generate the said $20 billion without spending a dime on advertisement. “This is the power behind Tesla. No other company anywhere on the planet comes even close.”

Despite all these breathtaking forecasts, Tesla’s growth efforts face a lot of glitches; the need for more factories and expanded product lines inclusive. Albertine said Musk will likely invest in factories in China in an effort to move into the Asian market. According to Wall Street analyst Gordon Johnson, who spoke on Friday on “closing bell,” investors are warned not to be “an enthusiast about a man. You have to look at the numbers”.

Gordon revealed that Tesla has also spent about a billion dollars last quarter in addition to $3.4 billion the company had burned through last year. “I’m not that hot on Tesla’s future, and quite frankly, we find it kind of ridiculous, you have to look at cash flow, you have to look at their ability to compete. You’re basing everything on belief in a man. The point is, do they make cash? Do they make money on cars produced? The answer is no,” Gordon said according to CNBC