Vehicle manufacturer Tesla released a video showing the technique in which its engineering team is working to create a prototype ventilator from car parts. The company has pledged to develop ventilators to tackle the shortage of ventilators and aid in the treatment of patients with Coronavirus, or COVID-19. “We’re trying to make some ventilators out of some car parts,” the engineers explain, “so that we can help out with the medical issue without taking away from the supply’, the company stated.

The prototype that is designed by the team is created by taking a hospital-grade air supply and sending it into a mixing chamber, which is a reused car part. In the mixing room, air combines with oxygen before being sent through a wall body, which creates pressure and volume waveforms in the air. The air comes out and passes through a series of sensors like a flow rate sensor and a pressure sensor, before being sent through a filter and into the patient’s lungs. When the patient exhales, the carbon dioxide- they breathe out is carried through the second set of pipes with more sensors before reaching a valve which maintains positive air pressure in the lungs to help the patient breathe more easily. 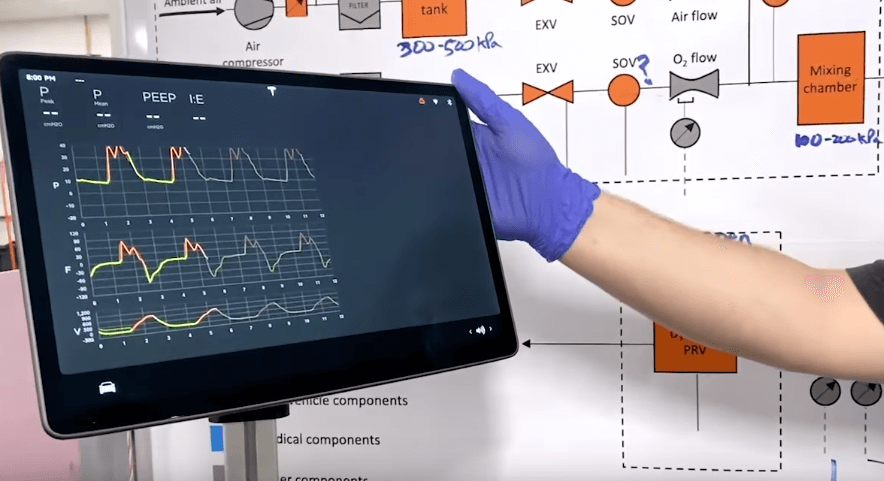 The Tesla team has worked the design into a package version that uses the Model 3 infotainment system to display patient information on a touch screen, aided by the use of Model 3 vehicle controllers. According to the engineers, there is still a lot of work to be done on the design before the ventilators are ready and fully functioning for production and distribution. The team is gradually progressing.

Tesla Company last month announced it would be manufacturing ventilators if required to address the shortage of ventilators and medical equipment in the U.S. As such, for that purpose, it reopened a gig factory in New York to produce the ventilators. This company was earlier shut down. By the beginning of this month, hospitals across the New York area started receiving donations from Tesla Company including masks and donated devices, with promises of more ventilators to be shipped soon.

Tesla’s medical donations, however, have been subjected to some controversy. Many critics have questioned how useful the donated devices and pieces of equipment will be, as they appear to be a type of device called a ‘Bilevel Positive Airway Pressure (BiPAP)’ machine. This machine is similar to a Continuous Positive Airway Pressure (CPAP) machine. These devices are not designed to deliver oxygen into patients’ lungs and are converting them into ventilators.