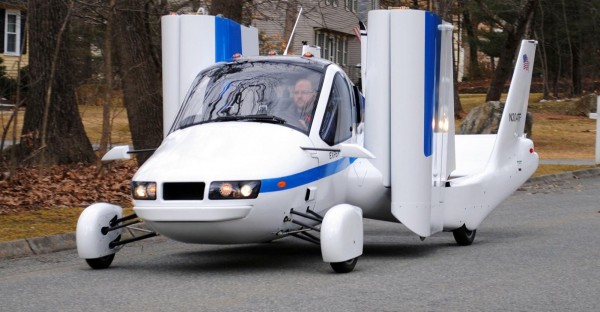 Terrafugia’s Transition flying car prototype is all set to be shown off at the New York Auto Show this week. Terrafugia’s Transition flying car prototype took its first test flight recently, bringing the possibility of flying home from work and parking in the garage closer to reality. Carrying a price tag of $279,000, however, it’s still unsure as to how many people will want to risk driving it along a regular road.

It looks like the folks at Massachusetts-based Terrafugia Inc. have themselves a flying car. The company has completed the first test flight of the production prototype of its flying car, staying in the air for eight minutes at an altitude of 1,400 feet. Wow!

Even after stick some wings on a car it’s still a car, one with wings attached. Before you can truly call a car a flying car, some brave souls have to be convinced to climb inside and try flying it. Looks like, it is going to be a task for Terrafugia because if it gets off the ground and returns safely we will have ourselves a flying car.

Nearly after six-year flying car project, Terrafugia’s has experienced a fair amount of turbulence along the way, with both legal and technical obstacles which have threatened its development, but news of the successful test flight is a great leap forward. Terrafugia’s flying car comprises two seats, four wheels and wings which fold up along its side and it has already generated a great deal of interest among drivers/pilots. Are you serious? What would you be called if you set on the road driving a Terrafugia’s flying car

It has been reported so far that about 100 people have put down a deposit of $10,000 for the Transition, though this figure is expected to jump when it’s shown off at the New York Auto Show later this week.

Terrafugia’s flying car, which comes with a pricetag of $279,000, can reach speeds of around 70 mph on the ground and 115 mph in the air, and runs on unleaded automotive fuel. As a car, it can do 35 miles to the gallon, while off the ground it burns five gallons an hour.

Terrafugia’s chief test pilot Phil Meteer was understandably upbeat following his first experience in the Transition. He said, “It’s a remarkable vehicle both on the road and, now, in the air. When I drove it into the shop, literally from the road through the garage door, I was amazed that I had just flown it at Plattsburgh a few days before. A long-overdue mode of transportation and fun is just around the corner.”

Terrafugia said last summer that the personal aircraft could be released by the end of 2012. Terrafugia says it’s aiming for sales in fly-in communities like the 600 or so such locales in the U.S. where people either own small planes or Yacht in and out of town on them.

Terrafugia CEO/CTO and co-founder Carl Dietric said, “With this flight, the team demonstrated an ability to accomplish what had been called an impossible dream. We look forward to continuing to show that the challenges of bringing a practical street legal airplane to market can be overcome”. For those of you in the New York area who are interested in seeing the flying car can check it out at the New York Auto Show, taking place this Friday through April 15, where it will be on displayed.