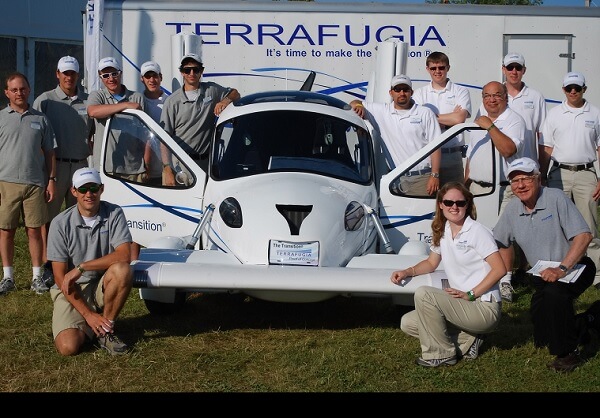 Terrafugia the carplane or popularly known as the flying car finally takes flight leaving Industry Leaders in an Awe. The Flying Car’s first public demonstration took place in the afternoon air show on the first day of EAA AirVenture in Oshkosh, Wisconsin.

This company which is based in Massachusetts has already displayed its prototypes for its car-plane hybrid at AirVenture for eight years. But this year for the first time the Terrafugia Transition flew and drove in public.

Terrafugia is planning to market its roadable aircraft to pilots who hate being grounded by bad weather or have trouble travelling after they land. Pilots who are flying into small airports are usually stuck there unless they can catch a cab or rent a car. With Terrafugia transition pilots can drive to their destination or to an area where the weather is good for flying. There wouldn’t be a need to rent hangar space, it can be parked at home. The wings are designed to fold up next to the car. That makes it small enough to travel down the highway and park in a one-car garage. And it could make the commute to work a breeze, flying over backed-up traffic.

“It’s the convenience of having your car and plane in one package,” said Richard Gersh, Terrafugia vice president of business development. “It’s the next ‘wow’ car.”

Terrafugia CEO Carl Dietrich said, this was their second prototype, and the design will be slightly tweaked for a third version. That Flying Car will have an updated engine management system and better fuel economy. It will be powered by the fuel-injected Rotax 912 IS.

Dietrich believes the company is “still learning” from this airplane and he hopes the third-generation prototype will develop into the final conforming Flying Car for production. One of the big changes in the third version will be to make the tail booms and all the outside components of the aircraft replaceable, if in case they are damaged the aircraft can be more easily repaired. “That will keep insurance costs in check,” Dietrich said.

It’s projected to fly at 160kmh in the air with a range of 660kmh with half an hour of reserve fuel; on terra firma it can travel up to 95kmh with fuel efficiency of 6.7-litres per 100kmh.

“We don’t know the market yet. A lot of people are waiting to see it fly,” Gersh said. “But if you see one flying, that’s the best advertising.”

Christy Gren
Christy Gren is an Industry Specialist Reporter at Industry Leaders Magazine she enjoys writing about Unicorns, Silicon Valley, Startups, Business Leaders and Innovators. Her articles provide an insight about the Power Players in the field of Technology, Auto, Manufacturing, and F&B.
« EADS set to reorganize, to be renamed Airbus Group
New Unemployment claims drop in the US »
Leave a Comment
Close