Tenkiv, a Sacramento-based start-up, brought to life in 2014 by Zack Juhasz, is well-known for its modular renewable energy systems. Tenkiv has created a system to power water filtration using the best and easily available renewable resource on earth i.e., sun. This solar thermal energy system is named ‘Nexus’. 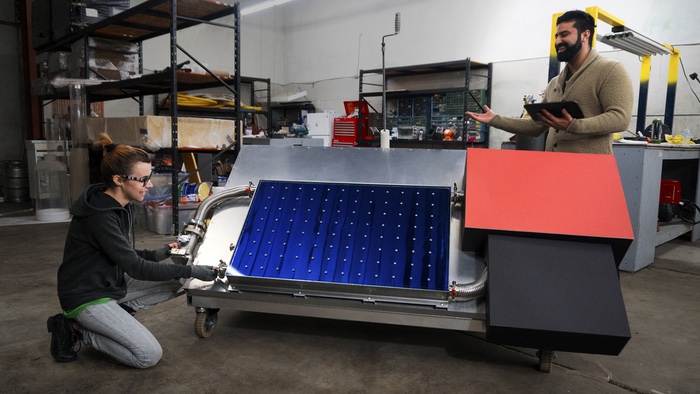 A prototype that demonstrates the functionality of the final product but has a different appearance.

Tenkiv Nexus is going to be deployed by a ‘kickstarter’ campaign the company has recently launched. They have plans to raise $50,000 from the public members for wide-spreading this solar energy powered water filtration system in the areas where access to clean water is rare. The company is heading towards the target, bearing good public support, with some $15,000 collection done yet. With first of their water filtration Kickstarter campaign, the company is planning to target 10,000 people, at least to start with certain mass.

Approximately, 71% of the earth is covered with water. Out of total 7.4 billion of the world population, the 1.1 billion people don’t get access to clean water. There are plenty of surface water and ground water resources available like rivers, wells, lakes, oceans etc. We can easily get the water from these vast resources. But it contains contaminated water with harmful micro-organisms. The water filtration techniques available today are costly and needs electricity in most cases. People in rural areas are deprived of wealth and electricity. Hence, this results in increasing death rate and high child mortality rate.

Tenkiv Nexus is an innovative, moderate, renewable energy system that is focused on solving the clean water crisis. With the use of heat energy of sun, we can power almost anything for 1/13th the cost of solar panels and 1/5th the cost of fossil fuels without any subsidies. Nexus provides the perfect solution to the problem that 1.1 billion of the total population faces every year. Moreover, the fact Nexus chiefly is utilizing the most abundant and freely available source of heat energy brings more power to the system.

Tenkiv Nexus is a successor to the company’s previous Kickstarter Tekdaqc, a data acquisition and control board system. Tekdaqc went a huge success and today it has been used worldwide by the renowned organizations such as NASA, ETH Zurich and more.

Nexus with just one panel has a capacity to produce 2000 liters of water a day without relying on any external source of power. Humans on an average use 15 liters of water per day including their survival and sanitation. The available amount of water on the earth is very high in terms of the usage. Tenkiv Nexus water filtration system can filter water fetched from any source be it river water, ocean water or contaminated gutter water. This makes the system highly productive and intelligent.

The Solar thermal collector system is made up of cost-effective steel and glass materials. Because of these durable materials, the system is capable of functioning in any environment. The filtration system collects heat from the sun and then can supply heat whenever needed. Despite water filtration, the heat generated from the system can be used for electricity production, refrigeration, heating etc. Furthermore, the system will help to cut the total economical cost the countries spend on energy and water filtration.

The company have partnered with Afghan Development Association to install pilot Nexus plants throughout Asia and Africa.  Also, California-based UC Solar Institute and Europe’s leading manufacturer of heat emitters Rettig are extending their support to the renewable energy based system. The company is starting its first deployment with Afghanistan.

Let us support this life-saving, modular renewable energy system to solve the biggest of the problems causing human destruction. The Tenkiv Nexus system undoubtedly is worthwhile the efforts made to ensure clean water access to the needy.

Anna Domanska
Anna Domanska is an Industry Leaders Magazine author possessing wide-range of knowledge for Business News. She is an avid reader and writer of Business and CEO Magazines and a rigorous follower of Business Leaders.
« ‘Waymo’ Google Alphabet Sues Uber for Unlawful Practices
Leaked Photos of the Range Rover Velar reveal the look of a Luxury SUV »
Leave a Comment
Close