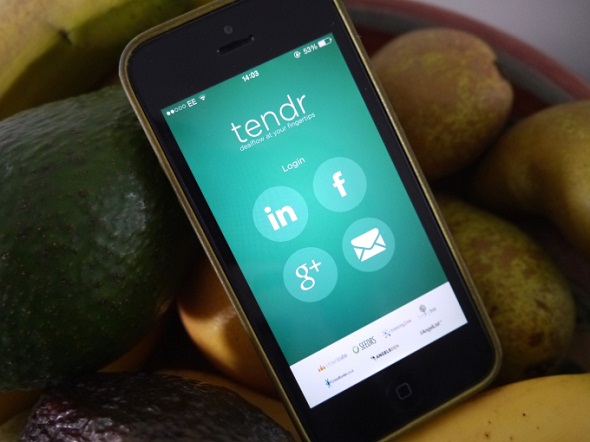 Tendr – an aggregator-sorter app was launched today in the U.K. The Tendr app runs on iOS and Android devices, promising to apply Tinderish thumb grease to equity crowdfunding investment campaigns to expand the deal flow funnel.

The app extracts campaign content from different Crowdfunding platform at launch, including Seedrs, Angel List U.K, Crowdcube, Crowdfunder, Angels Den, Funding Tree and investing Zone, letting investors maximize their business exposure that they expect to back within a single interface, in addition with applying an addictive, Tinder-style snap-decision sorting mechanism.

The founder of global super angels investment club QVentures – Lex Deak argued that Tendr eliminates friction and thereby increases investment efficiency in deal sourcing. It is a useful tool for investors that are current having access up to a couple of platforms individually, and a lightweight medium for entrepreneurs, and the wider start-up ecosystem for staying abreast of current trends in financial sector.

The app is useful for most of the investors and entrepreneurs, who want to grow their business exposure and make them learn, how groups invest together, and which deals are beneficial and profitable for their business proposals. In the near future, the app will have a norm wherein investors will be able to invest into unlisted equities and alternative investments from their smartphones. Investors, who want to invest money that they’ve found via Tendr, are direct to the relevant platform.

Currently, the app is not having any business model of its own. But, if in case, its usage scales up, Deak said that the app company will look after suspending any type of transactions that it has generated, and added that development has so far been primarily booted by the management team.

Deak said that if the number of users grows, the app will be included with a wider variety of alternative features like, property deals, and loans, with a change in a small percentile of transactions.

Deal stated that the development team is working on including tailored content for users in relation to their investments priorities that may open up an addition stream of deals. Finally, the team will be collecting an insightful data on the alternative finance sector, and they will always make the majority of this collated-data freely available to the users, but there may be a situation for a cost, the company expects to make personalized reports in the future.

The first version of app provides only minimum filters, so users can select only those platforms in which they’d like to view deals from and customize it, also how frequently they’d like to be notified of new deals. Deak revealed that the next version of the app will include more advanced notifications than previous one, so the users can get a push notification when a liked deal reaches at a certain percentage of funding.

Initially, Tendr is launched in U.K. and it will open up its market in Europe, and further nations, later this year.

Christy Gren
Christy Gren is an Industry Specialist Reporter at Industry Leaders Magazine she enjoys writing about Unicorns, Silicon Valley, Startups, Business Leaders and Innovators. Her articles provide an insight about the Power Players in the field of Technology, Auto, Manufacturing, and F&B.
« Fitbit plans for an IPO of 22.4 million shares
Lockheed wins contract valued at $920 million for buying aerospace materials of 94 F-35 fighter jets »
Leave a Comment
Close

Apple is bolstering its smart home devices space with the introduction of a new hybrid device— a combination of an Apple TV and a smart speaker with a screen, according to news r
2 hours ago

One of the most trusted pioneers of technology in the automotive sector, Toyota Motor Corp. has finally revealed the future of the EV segment by showcasing its new SUV, encompassin
2 hours ago