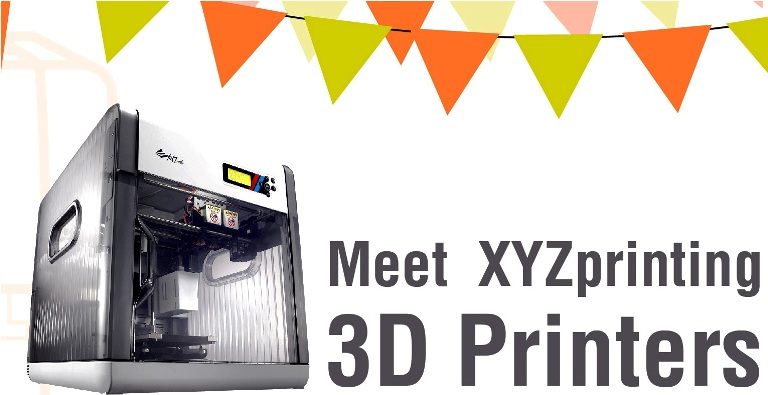 Taiwanese manufacturer of the world’s most affordable consumer grade 3D printers XYZprinting launched its ambitious next step, The Da Vinci 1.0 AiO or all-in-one 3D printer and scanner for sale starting today at $799.

“With 3D printing continuing to gain traction across a variety of markets, including education, design, fashion, medical and automotive, the possibilities are just beginning to be realized,” said Simon Shen, CEO of Taipei-based New Kinpo Group, the parent company of XYZprinting. “The Da Vinci 1.0 AiO was designed with quality and affordability in mind, to enable the continued discovery of applications and usages for 3D printing.”

XYZprinting has found a niche in offering 3D printers at bargain-basement prices as it tries to bring low-cost 3D printers to the mainstream. The product is a follow-up to the $500 for a one-color model 3D printer that the company launched earlier this year.

XYZprinting, which also has a U.S. office in San Diego, Calif., has tried to make it easy for users to design their own 3D object through software that runs on a PC. The Da Vinci 1.0 AiO uses a proprietary scanning software called XYZScan that allows users preview the scan with the click of a button and edit the object as necessary before printing. Users can also scan an object and then modify it or share the design with others.

The new device has built-in high-resolution scanning where objects are scanned with an industrial grade 0.05mm resolution in a matter of just 5 minutes, and saved in .stl format. The high resolution scanner works in unison with diagonally placed laser sensors combined with a turntable work together to ensure a comprehensive scan, even from the most difficult angles. The machine has a patent-pending algorithm that automatically fills in voids with appropriate texture and curves to provide a seamless printing process.

“We are trying to set the most reasonable prices,” Shen said. “If we can get it below $500, it becomes more affordable than an [unsubsidized] mobile phone.”

Shen said the device shares the same innovative and user-friendly features of XYZprinting’s present award-winning and top-selling printers, such as a smart filament cartridge system, easy nozzle cleaning, and one-year limited warranty at no cost.

For those who are interested in ordering this new machine, The Da Vinci 1.0 AiO is available for order on Amazon, and it will go on sale on sites such as NewEgg.com and retailers Micro Center and Studica soon.

Industry Leaders has curated details and insights on the five best electric bikes that will be available by 2022.
19 hours ago

Jeff Bezos is an American entrepreneur with so much experience in leadership and business. We can learn a lot from the New Mexico-born billionaire.
22 hours ago