One of Moshe Safdie’s “first principles” that form the basis of his design philosophy – “humanizing the megascale” takes on an entirely new dimension when considered in context of Marina Bay Sands’ Skypark and Infinity Pool.

To start with, think Singapore and you’re probably visualizing an intensely dense city, teeming with people constantly. Sure, there’s the waterfront and all the bright lights along there, but a leafy park 200 metres above ground, with a 150 metre long swimming pool? 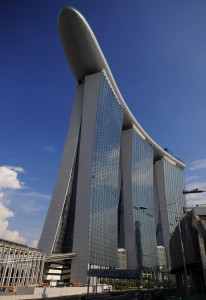 While the monumental Marina Bay Sands resort complex has added a pretty big unmissable edifice to Singapore CBD’s skyline, the Infinity Pool within the Sands Skypark – an architectural feat featured on National Geographic’s Megastructure show – gives all those looking for a ‘laze by the pool’ an amazingly breathtaking experience.

The Infinity Pool is part of the 380 metre long Sands Skypark, which spans across the three towers of the Marina Bay Sands complex and covers a total area of 12,000 sq mts. The length of this roof-top deck can be equated to the height of the Eiffel Tower.

The Skypark also features a botanical garden with 250 species of trees and 650 plants (of course). The term ‘roof-top deck’, used for this gigantic park in the sky seems like a misnomer here huh?

How did the Skypark and the 15,000 sq ft Infinity Pool come about?

Well, according to Safdie, once the footprint of the building was laid out on site, the complex still lacked the space required for recreational facilities like swimming pools, gardens and jogging paths. Hence Safdie’s incredibly testosterone-laden idea of lifting up the entire recreation-cum-relaxation zone by creating a three-acre skypark 200 metres above ground.

While initially the Skypark was planned to be limited to the footprint offered by the three towers put together, after consultations with a feng shui expert, the design team decided to cantilever 66.5 metres of the park off the north tower of the casino-resort complex.

What does this do for Singapore? According to Safdie, “The move gave the building directionality, and now, as you enter Singapore from the highway, it presents itself as a dramatic gateway element”.

Requiring around 7000 tonnes of steel to build, this engineering marvel, designed with the help of structural engineering experts Arup,  is capable of hosting almost 4000 people, with the observation deck alone being capable of holding 900 people at once.

This Israeli-born 72-year old architect is driven even today by the same design principles that formed the basis of his practice 40 years ago: innovating within the very real factors constituting urban life i.e., density, demographics, and scale all the while preserving the specific local identity of a place confronted by globalization.