While some of us still see chocolates as the different flavored sweet edibles in boxes, others have taken note of its significant share in the global market. Yes, considering the price of some of the world’s most expensive chocolates.

With the growing number of recipes and unique designs, a good number of the world’s most expensive chocolates have undeniable been presented as gifts. And no lover of these ‘sweet russets’ would fail to appreciate the most uniquely designed bars made from secret recipes.

About 7.7 million tons of chocolates are expected to be consumed in the globe between 2018 and 2019. That’s definitely a lot of money, even if we consider a pound at an average of $20. Chocolate sales in the United States alone recorded a total of $22.4 billion in 2017. And more distinct recipes mean an increase in the number of the world’s most expensive chocolates, that’s just fine. We all deserve something attention-grabbing and rich.

Here’s our list of the most expensive chocolates available in the market with the prices per piece. It covers those prestigious chocolate bars that every fan would love to have. 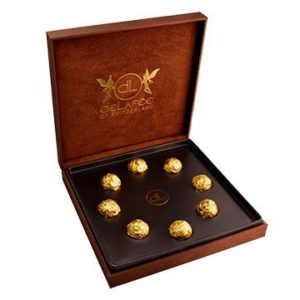 Delafee is one of the world’s most expensive chocolates because not many can afford to spend $508 for a pound of chocolate. It is supplied with two expensive ingredients; high-quality cocoa beans and 24-karat gold flakes which is edible. That would have blown your mind if they were not edible. The gold flakes are applied manually on each bar of Delafee chocolate to garnish the taste for memorable bits.

La Madeline is made with truffle oil from France; one of the ingredients driving the chocolate price. Other ingredients include 71-percent single-bean Ecuadorean dark-chocolate and a rich cream infused with vanilla pods. Each La Madeline Au Truffle order takes about two weeks to be delivered and a pound is about $1,000.

Each of the 2014-harvest 50-gram bars by To’ak Chocolate contains 81-percent dark chocolate fermented 6 days in Spanish Elmwood. The cacao trees it’s sourced from have their genetic lineage traced to 5,300 years ago – the very first set of cacao trees ever owned. Only 574 bars of the 2014-harvest were produced. At that price for a 50-gram bar, 2014 harvest chocolate by To’ak costs about $2,500 per pound.

Founded in 1800 by Sulpice Debauve, the Debauve & Gallais has a rich heritage history and enamors experience in the production of chocolates. It’s a brand made from natural ingredients without dyes or preservatives. It’s a production using high-end cocoa, low sugar and other natural ingredients such as Turkish raisins, Piedmont hazelnuts, Perigord, etc. As a reputable French chocolate, truffle oil and bonbons are also additions in its production.

Patchi is produced by Harrods and a Lebanese chocolatier. The team started in 2008 to produce chocolates studded with Swarovski Crystals which are packaged in handwoven silk from India and China.

Chocopologie moved straight to the list of the most expensive chocolates in the production year. It goes for $2,600 per pound and was founded in 1999 by Fritz Knipschildt. The stunning ingredient is the French black Truffle oil contained in a fantastic dark chocolate truffle. A piece goes for $250. 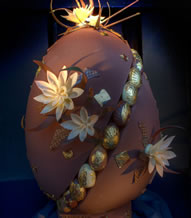 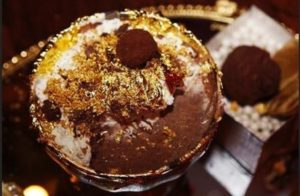 Would you prefer Frrrozen Haute Chocolate or a brand new Toyota Camry? This chocolate was declared the world’s most expensive dessert by Guinness World Records in November 2017.  It’s made by Serendipity 3 restaurant and purchased based on order at $25,000. Frrrozen Haute chocolate is made using 28 exotic and rare cocoas, a La Madeleine Au Truffle we have mentioned and a gold leaf. The chocolate dish and its base are both made of diamonds and gold, the spoon is gold. However, it’s not yet clear if Frrrozen Haute Chocolate has made any sale yet.

Anna Domanska
Anna Domanska is an Industry Leaders Magazine author possessing wide-range of knowledge for Business News. She is an avid reader and writer of Business and CEO Magazines and a rigorous follower of Business Leaders.
« Internet crosses the 4 billion-user mark!
5 Most Inspiring Entrepreneurial Success Stories »
Leave a Comment
Close