Survey Finds Almost Half of U.S. Can Hardly Function without Smartphones 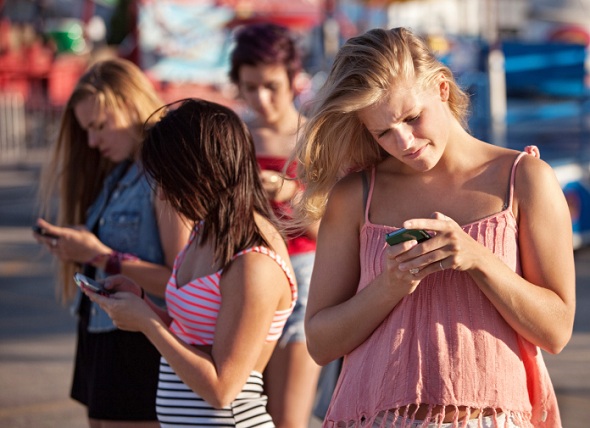 47 percent Americans admitted they couldn’t last more than a day without their smartphone.

It’s probably a common sight to see numerous people walking with a smartphone in their hand, most likely looking into their phones and not paying attention to where they are walking. Between emails, Instagram, Facebook, Twitter and Pinterest, there’s so much to keep up with. But just how dependent are Americans on their smartphones?

A recent survey shows that people’s addictions to their phone might be more serious than originally thought. The research commissioned by Bank of America says nearly half of Americans (47 percent) admitted they couldn’t last more than a day without their smartphone.

Additionally, of those surveyed who use their smartphone for bank-related works, 31 percent said they log on at least once per day, while around 82 percent access their accounts at least once a week or more. Nearly 62% users said that they have at some point tried to use mobile banking. Consumers normally use their smartphones to monitor account balance and view their statements.

Mobile solutions executive and senior vice president of Bank of America, Marc Warshawsky said in a statement that smartphones have altered people’s lives and it has in fact now carried over to their finances too.

“Bank of America now has more than 15 million active mobile banking users who access their accounts on a mobile device over 165 million times per month,” Warshawsky said. “We’ve seen this number continue to grow and recently the number of monthly mobile banking logins surpassed online banking logins for the first time.”

So what would happen when one of them forgets their device? Would they be willing to go back home and get their device? For 30 percent of them, the answer is yes, they would go back, no matter the distance.

Furthermore, the survey also found that 60 percent of them put the importance of their smartphone above the daily staples in their lives such as coffee and two-thirds (76 percent) considered it more important than television.

Perhaps what’s even more alarming is that nearly 91 percent of them claimed their mobile device is as important to them as their car and even their deodorant. Among the millennials or those in the age group of  18 and 24  claimed they are more attached to their mobile phones than their personal hygiene with 90 percent saying their device is more important than internet and even more than 93 percent ranking them above toothbrushes.

When asked about other people’s mobile manners, 38 percent of respondents said checking a phone while driving ranked as the most annoying thing to do, While surprisingly just 7 percent of them find checking a mobile phone during meal times most irritating.