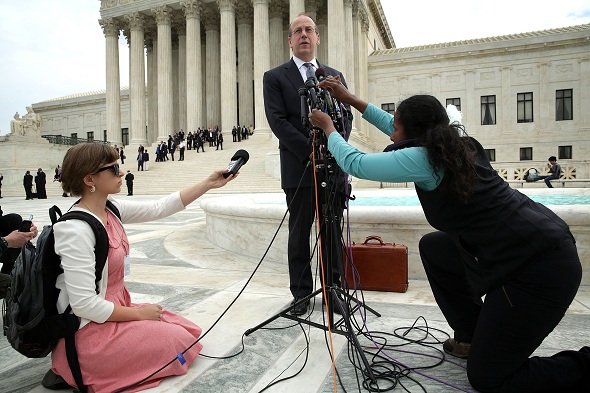 On Wednesday, the U.S. Supreme Court reached a 6-3 decision against TV streaming service Aereo, which held that the company’s technology of allowing subscribers stream and record broadcast TV without the broadcaster’s permission violated the Copyright Act.

Justices ruled that Aereo is tantamount to a cable company, not merely an equipment provider. Cable companies normally rebroadcast over-the-air TV signals to their subscribers through their existing networks. To do this the companies must pay a retransmission fee to the content creators, allowing them to provide without infringing on the networks’ copyright. Aereo operates by renting individual TV antennas to each subscriber and then beaming that signal to the subscribers phone or tablet allowing them to record and playback shows. Under copyright law, Aereo argued that it was same as private performance of shows and hence not subject to retransmission fees.

It’s a remarkable triumph for broadcasters such as CBS, NBC, Fox, ABC and allies such as the NFL, which argued that Aereo captures networks’ signals and would have driven broadcasters and major sports out of over-the-air transmissions to secure their intellectual property. They said the ruling is a victory for consumers.

Usually, service providers are not held responsible for what their subscribers do with their service. For instance, a cloud storage service such as Dropbox cannot be held responsible if an individual uses its service to allow others to download copyrighted material. According to the ruling, the fact that Aereo was just providing the antennas and delivering the transmissions captured by those antennas did not exonerate them of responsibility for the copyrighted content that was being transmitted.

The ruling will most likely shut down affordable content streaming services like Aereo. It was obviously the price that was drawing users to Aereo instead of traditional cable service. As Aereo will now be required to pay the costly retransmission fees, the cost will be apparently passed on to subscribers, resulting in the service being far more expensive than the present $8 per month, so the business model is likely no longer supportable. The decision is likely to affect several similar service providers as well.