SunEdison and TerraForm turn to wind generation, will acquire First Wind for US$2.4 billion 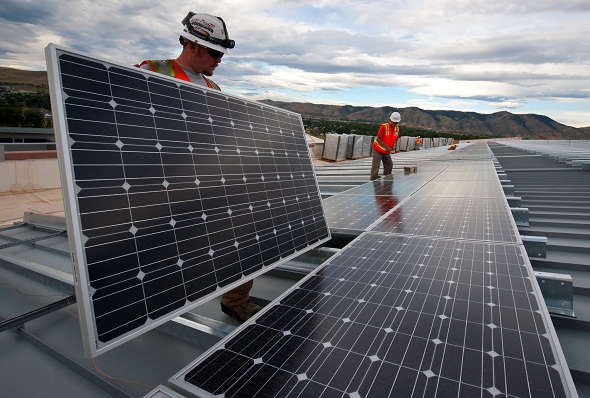 With this deal, SunEdison would be world’s largest renewable energy development company. SunEdison said it was raising its 2015 project installation guidance from a range of 1.6GW to 1.8GW to 2.1GW to 2.3GW. The company’s shareholders are expected to profit from asset management revenues, increased project development cash flow and dividend payments from TerraForm Power.

The First Wind acquisition also establishes TerraForm Power as a major asset owner in the wind energy market. SunEdison is the parent company of TerraForm Power, which owns and operates its solar farms.

“The acquisition of First Wind transforms both SunEdison and TerraForm Power into diversified renewable energy companies and will make SunEdison the leading renewable power plant developer in the world,” said Ahmad Chatila, President and Chief Executive Officer of SunEdison. “By bringing together First Wind’s proven development and operational capabilities and SunEdison’s global corporate infrastructure and renewable energy development and finance experience, we will be well-positioned to capitalize on the significant growth opportunities in the global wind power markets and drive returns to shareholders of both SunEdison and TerraForm Power.”

As for the financial details, SunEdison said that the total consideration is of $2.4 billion that would be funded by bridge financing, comprised of US$1.9 billion in upfront consideration and a US$510 million in earn-out. Also SunEdison is expected to issue a US$340 million seller note, while the earn-out would be paid upon the completion of several projects in First Wind’s pipeline backlog. However, TerraForm Power would acquire First Wind’s operating portfolio for an enterprise value of US$862 million.

SunEdison’s portion of the consideration is $1.5 billion. A non-recourse warehouse financing facility is to be developed by the company for projects that are expected to be dropped down into the TerraForm YieldCo.

According to the deal, TerraForm acquires 521MW of contracted wind generation assets from First Wind and adds 1.6GW of pipeline and backlog projects and are expected to be operational in 2016 and 2017. Included in the deal is an additional 6.4GW of project development opportunities. The acquisition was said to enhance the generation capacity of TerraForm’s operating portfolio by more than 50%.

Paul Gaynor, Chief Executive Officer of First Wind said, “This new strategic organization will allow us to join with SunEdison to develop and invest in new, long-term-contracted, well-sited and well-run renewable energy projects that deliver clean energy to homes and businesses across the country and internationally. We will be able to leverage our strength in development and operations, proven during the completion of 1.5 GW of wind projects over eight years, with two world-class companies.”

The transaction is expected to close during the first quarter of 2015, subject to customary closing conditions.

First Wind is a private company based in Boston operating or building renewable energy projects in the Northeast, the West and Hawaii, Vermont and Massachusetts. It said its projects had a combined capacity of nearly 1,300 megawatts, or enough to supply energy to more than 425,000 homes every year.

Accomplished comedienne and writer Tina Fey has described the imposter phenomenon as oscillating between extreme self-doubt and egomania.
15 hours ago