Garage startup journeys have always been enthralling. Hewlett-Packard garage holds significance for being the birthplace of Silicon Valley. While some garages have played birthplace to billion dollar companies like Google, Apple, Nike, and Dell. Their journeys edify that every business has a humble beginning – it’s not where you start, it’s where you end. One such captivating journey is of an ecommerce store, born during the dot-com NASDAQ bubble – a time when Wall Street was still skeptical over embracing Silicon Valley’s sunny confidence. It was an era in which office-warming parties signalized belly-dancers, Krispy Kreme donuts and trannies serving burgers, defining the success of the new internet companies. Internet businesses tasted ephemeral success – they burgeoned in the 90’s – capitalizing on the internet boom, and collapsed at the dawn of the millennium collecting their bankrupt, deluded selves. It was also an era in which one such internet businesses survived the rough patch and lived on to become world’s largest online retailer – The Amazon.com – with 306 items sold every second at its peak sale in 2012. Here’s Amazon Inc. success story. 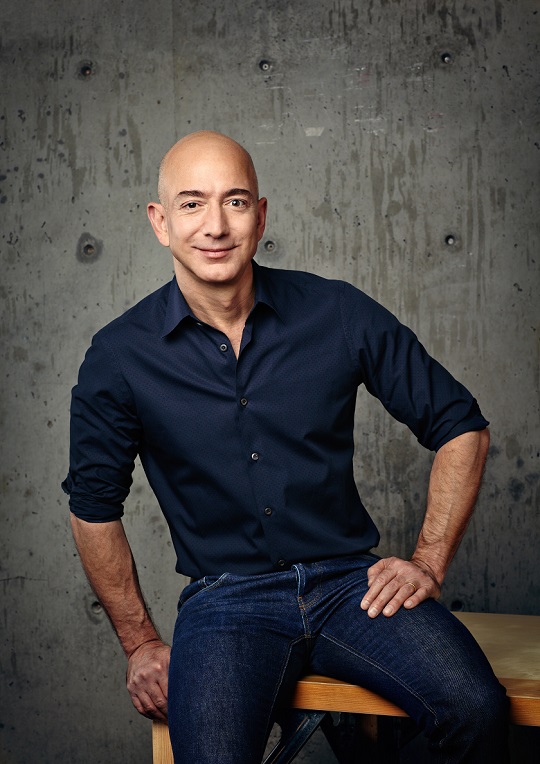 A flight more likely to drown than cruising altitude: Inception to 1999

Jeffrey P. Bezos, a business rookie gave up his well-paying Wall Street Hedge Fund job and started documenting a prospective business plan on a road trip to Seattle, laying the groundwork for an internet business that would sell only books. Incorporated in July 16, 1994, the company’s original name was ‘Cadabra’, however, a year later in 1995; it premiered with a completely different name, the Amazon.com. Initially a three-person startup, Amazon Inc. was daringly dubbed as Earth’s biggest bookstore. The online bookstore sold to all 50 states and over 45 countries. Just a few days after its launch, one of the founders of Yahoo proposed to feature the site on its ‘What’s Cool’ page – remember this was the decade when internet businesses were either backed by founding fathers of other businesses or scissored. The result was a tremendous soar in orders – from a sheer dozen books per day to over $12,000 worth of orders in a week! Call it serendipity?

For a business owner who believed in upgrading the website and stocks once business came in, it was a little hard to keep up with the growing number of orders. A few months after its launch, Jeff Bezos team had sold a mere half-million dollars worth of books, but was seen posting growth rates that gauged Wall Street’s eyeballs. In spite of no advertising, word of mouth kept spreading – talk about influence and more credibility!

Its sales had hit $15.7 million in 1996 and $147 million in 1997, all thanks to the marvelous Amazon teamwork, staying up until 1 to 2 in the night packing orders, answering customer queries.

The official hiring strategy of Amazon Inc. was a sanguine one; it meant that every time you hire someone, that person has to be smarter than you. Administrative assistants were seen tracking every Rhodes Scholar to offer them jobs – Jeff Bezos was that fascinated by SAT’s. By the end of 90’s it had 500 representatives answering emails, helping customers find books on a wide selection of topics. The early employees were seen boiling under the pressure of targets and competition – a scene much common in dot-com start-ups – working an extra 10 hours beyond their shift, bringing the best of productivity and firm performance.

In the dot-com era, most public companies were obsessed with quenching short-term shareholder demands. This meant, continually maximizing profitability and stock performance for the earnings call rather than focusing on long-term investments and value establishment. Jeff Bezos did the exact opposite – he started working against a much longer timeline, rather than sniffing around for speedy cash-out like other dot-com entrepreneurs. Trade analysts called it a gateway to going bankrupt, yet Amazon focused on its long-term vision no matter how much the stock was beaten. Within a year of the dot-com bubble burst, as other dot-com startups were seen dispersing, Amazon.com announced its first profitable quarter.

Amazon.com – A Voluminous River of Products and Customer Reviews

Before the start of millennium, Amazon.com had successfully launched its websites in Europe and the United Kingdom. In 2000, Amazon featured its logotype with an arrow curving from A to Z, symbolizing comprehensive A to Z products from 3rd party seller merchandise and a smile on customer’s face. Amazon was seen moving into music CDs, videos, toys, electronics, and much more vast selection than that offered at any other superstore or mall.

Amazon’s customer service had been recognized by Jeff Bezos as the cornerstone of Amazon.com. The founder would himself answer emails at times. Once, an elderly lady sent an email saying that as much as she enjoyed ordering books from the site, it was a little difficult for her to tear into the difficult to open the packaging and had to wait for her nephew to come over and open it for her. Next thing, Jeff Bezos had the entire packaging redesigned to make it easier to open.

-Time Magazine named Jeff Bezos, Person of the Year in 1999.

In 2002, the firm in partnership with hundreds of retailers added clothing sales to its product line-up. It was around the same time that Amazon had launched its online sporting goods store under an umbrella of 3,000 brand names. By now thousands of people were enjoying the wish list feature, adding products, knocking their way into customer’s desires. It has introduced the much-debated customer reviews, another community building feature being a leading source of product reviews tempting more customers to spend hours and hours reading reviews and ordering the product once it fits their needs.

No doubt, the online store had now turned into America’s largest online retailer with annual sales of over $10.7 billion, something that took Wal-Mart 20 years to achieve.

In 2007, Amazon released Kindle e-reader; the Earth’s Largest Bookstore had revolutionized the future of reading books, newspaper, and magazine forever. The dawn of e-reading increased the overall sales of books, Amazon’s sales were now increased by 38%, and profits were doubled. Jeff Bezos vision that eBooks would soon dominate the world of e-reading came true. With more and more e-reading devices, it e-books became the company’s bestselling format in a year. Kindle had secured its place in the hearts of 95% American readers. When Apple introduced its iPad tablet, designed to be used as an electronic reading device, Jeff Bezos notoriously responded by cutting Kindle’s prices and adding many more features to it. In 2011, Amazon introduced library lending service to Kindle readers providing access to over 10,000 titles, letting users download one book for free every month.

Amazon maintains 80 mammoth warehouses and fulfillment centers located around shipping hubs over the world to shelter its massive volume of products it sells 24*7 all days a year. How does it do it? Amazon warehouses have a flexible and optimized system in order to handle millions of orders. Every product is given a unique barcode when it enters the warehouse, following arbitrary product placement. There is a refined database that tracks and monitors every product that enters/leaves the warehouse, tallying on every single empty shelf.

Customer focused and a logically forward thinker Jeff Bezos has over the last 19 years always taken evolutionary advantage and revolutionized the way we shop. In his constant search for innovating the company, customer satisfaction, and its features, Jeff Bezos patented a controversial feature called 1-click ordering, forbidding any other online retailer from using a one-click purchasing option without paying a royalty to Amazon. But then the black crow of controversy has always followed the company flapping and shrieking. Instigated from Jeff Bezos’s commitment to selling books with titles such as The Pedophile’s Guide to Love and Pleasure to the discontinued hosting of a website associated with WikiLeaks from its web hosting services. The low-profile founder has got away without scrutinization for his ruthless slashing of cost and mass layoffs or to staying ahead of the curve by getting numerous patents. It’s the credibility earned from Wall Street’s caviar smeared nods that let him take the shots predictably.

Jeff Bezos demands excellence from those around him, pushing people to rise to his level. An employee, who was the first official shadow of Amazon, followed Jeff Bezos around as his chief of staff attending every meeting. An accomplished executive now, the employee runs Amazon Web Services, giving a glimpse of the decentralized model.

With Jeff Bezos’s visionary insight and capabilities, Amazon Inc. has now over 97,000 employees and a market capitalization of $142.6 Billion. In 2013, his net worth was $63.3 billion from the 19% stake in Amazon. For an ecommerce store that has changed the way we shop in last 20 years, one can only imagine what might be coming in the next 20 years.

Anna Domanska
Anna Domanska is an Industry Leaders Magazine author possessing wide-range of knowledge for Business News. She is an avid reader and writer of Business and CEO Magazines and a rigorous follower of Business Leaders.
« Will 2016 be the Year of Women CEOs?
GREEN REVOLUTION: Turning New York into Noah’s Ark »
Leave a Comment
Close

Many say that Bitcoin is the digital version of gold. While gold, like the dollar, is an outdated investment vehicle. We turned to experts to settle the bitcoin vs gold debate.
20 hours ago

The Porsche Taycan EV has outsold the Porsche 911 sports car for the first time since it was introduced in 2019 by the German automaker.
4 days ago