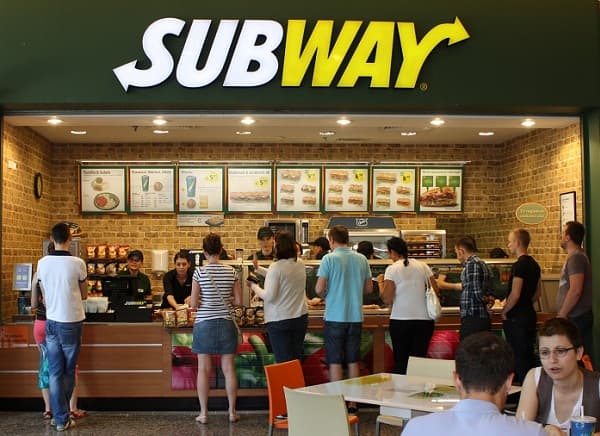 Subway is inarguably one of the largest restaurant chains in the world. The company has some 36860 restaurants globally and traces its history back to the 1960s. The Subway chain of restaurants was started by 17 year old Fred DeLuca in 1966. Whereas he had initially set out to attain a medical degree, the young DeLuca went into a business partnership with family friend Dr. Peter Buck and the first Subway restaurant was born. DeLuca and Dr. Buck’s first Subway restaurant became operational in Bridgeport, Connecticut, USA. That was 1965 and its original name was Pete’s Super Submarines. It would be years later before the first franchised Subway restaurant opened in Wallingford, Connecticut.

Today, the Subway Restaurant chain is headquartered in Milford, Connecticut, but has regional hubs for manning its global operations. The company also has country offices located throughout the world with a headcount of 1,000 employees. However, its franchisees world over employ more than 300,000 people in the localities they operate. The Subway Restaurant chain is operated by Doctor’s Associates, Inc. The restaurant is famous for making submarine sandwiches and salads. As of 2012, Subway has operations in 100 countries and is the second biggest single-brand restaurant chain in the world.

The company is also inarguably one of the fastest growing restaurant chains in the world. It comes second to Yum! Brands, with five regional centers and an ever expanding global empire. Today, Subway’s regional offices can be found in Europe, Australia, Asia, Latin America and the Indian sub-continent. The European regional hub is based in Amsterdam and is responsible for Subway’s European operations, cutting across several European states. The Australian and New Zealand chains are operated or run from Brisbane, Australia. Subway’s Asian operations are managed from hubs in Beirut, Lebanon, Malaysia, Singapore and India. Latin America operations are operated from Miami, Florida.

DeLuca and Buck started the Doctor’s Associates in 1966 as the holding company for Subway upon launching the second Subway restaurant in Bridgeport. Subway’s journey over the years has been marked by rising superior performance, thanks to ambitious growth plans. The two entrepreneurs launched Doctor’s Associates a year after launching the first Subway restaurant. To start the business, DeLuca took a $1,000 loan from Dr. Buck, a family friend. He opened his first sandwich shop on August 28, 1965. Over the years, Subway has enjoyed uninterrupted ranking in Entrepreneur Magazine’s Top 500 Franchises.

The crowning moment in the restaurant chain’s journey came in 2008 when the company was ranked 2nd overall franchise and the leading “Global Franchise”. In a poll conducted last year via social media, the company came tops as the most popular “Fast-Food Restaurant in the United States of America.” Most importantly though, the company has over the years expanded its franchise globally and surpassed renowned names in the restaurant business such as McDonald. As of 2010, Subway was ahead of McDonald in terms of franchisees globally, but McDonald dwarfed Subway in terms of revenue.

Primarily, Subway is renowned for the submarine sandwich (Sub). However, it also offers wraps, salads, meat, vegetables, cheese, cookies donuts and muffins. But with the global push for expansion, the company has had to adjust its offerings depending on the locality it’s operating. As such, menus may differ from country to country. One of Subway’s biggest and most common sandwich is the MBT. The BMT is made of pepperoni, salami and ham. The initials stood for Brooklyn Manhattan Transit before being changed to the current Biggest, Meatiest, Tastiest.

The 1960s, 70s and 80s were years of ambitious growth plans for the two entrepreneurs. The Subway brand name was first used in 1968 and the first franchised Subway sandwich shop opened in Wallingford, Connecticut in 1978. Subway’s most famous sandwich, the BMT, was first introduced in 1975. Initially known as Brooklyn-Manhattan Transit system in full, the name was changed in advertising campaigns to “Biggest, Meatiest, Tastiest.” The year 1975 also saw Subway launch its first restaurant outside of Connecticut; in Massachusetts.

The company would later follow up with additional national restaurants in other states of the U.S. By 1981, Subway had 200 restaurants, with that number reaching 300 a year later. By the year 1984, Subway was opening its 400th restaurant in Dallas. The same year, Subway launched its first international restaurant outside of the U.S. in Bahrain. The 1980s witnessed the expansion of Subway’s menu to include a range of other delicacies such as bread, cheese, steak, breakfast etc. The company also accelerated the expansion of its international operations with additional restaurants in Canada, Bahamas, Australia, Mexico etc.

This growth was sustained in the 1990s with the opening of additional global subsidiaries and menus. By the year 2001, Subway had clocked 15,000 restaurants worldwide and greatly expanded its range of delicacies. In 2002, Subway officially surpassed McDonald in terms of open and operating chains in the U.S. with 16,000 locations globally. By last year, 2011, Subway had reached its 35,000th restaurant. The Subway restaurant also has some 8,000 non-traditional restaurants. It has also opened a number of Eco Restaurants.

As the leading global restaurant brand, Subway is a restaurant of choice for many loyal customers globally. The company offers quick but healthy nutritious meals encompassing a wide array of menus. The company’s growth is guided by the need to offer customers fresh, delicious, made-to-order sandwiches. Its global outlets continue to expand daily.

Christy Gren
Christy Gren is an Industry Specialist Reporter at Industry Leaders Magazine she enjoys writing about Unicorns, Silicon Valley, Startups, Business Leaders and Innovators. Her articles provide an insight about the Power Players in the field of Technology, Auto, Manufacturing, and F&B.
« Glencore Heading To be the 4th Largest Miner of the world following Xstrata merger
Will the Spanish banking crisis be averted? Would the bail-out plan really help? »
Leave a Comment
Close