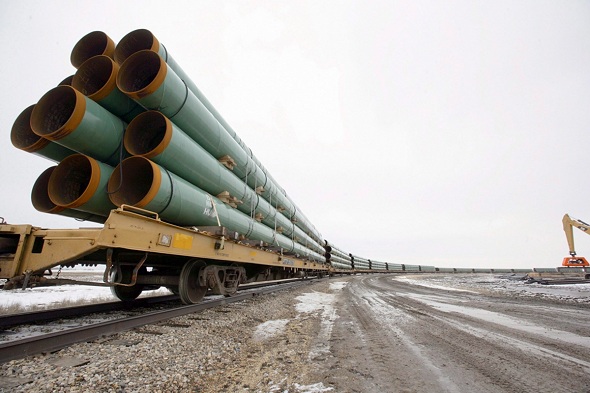 According to a new study, the much-debated Keystone XL pipeline ports could have a much larger impact on greenhouse gas emissions than the State Department originally estimated.

The study which was conducted by a non profit research organization, the Stockholm Environment Institute was published Sunday in the journal Nature Climate Change. It says the pipeline would increase global greenhouse gas emissions by as much as 121 million tons of carbon dioxide a year. If the controversial pipeline gets the go-ahead it might have a distressing effect on the planet’s atmosphere, which is already lurching from the prolonged effects of climate change.

The State Department estimated in February that the Keystone pipeline could raise emissions of heat-trapping greenhouse gases by significantly less, 1.3 million to 27.4 million metric tons annually.

The analysis says the pipeline could cut down global oil prices to $3 a barrel, which would most certainly raise consumption and quadruple the total greenhouse gas impact of the project. “If you give someone something cheaper, they’re going to use more of it; that’s certainly true on the global scale,” Donovan Power, a geologist said in a statement.

“The sole reason for this difference is that we account for the changes in global oil consumption resulting from increasing oil sands production levels, whereas the State Department does not,” wrote the study’s authors, Peter Erickson and Michael Lazarus.

The pipeline is estimated to cost around $5.3 billion and would carry oil from Hardisty, Alberta, to Steele City, Neb., where it would connect into a southern leg, a structure that already exists extending through the Gulf Coast of Texas. However, the pipeline project crosses United States border with Canada, it needs a green light from the federal government.

Whether the federal government will approve Keystone XL or not has become one of the most controversial debates of President Barack Obama’s tenure in office. While conservatives and business interests have been pressuring the White House to support the project, progressives and environmentalists are staunchly against permitting the pipeline.

The Obama administration has said they would allow the pipeline to be built only if this project does not significantly aggravate the issue of carbon pollution.

In order to highlight the dangers of climate change, the world leaders and environmentalists will rally in New York City in September for what’s being promoted as the largest climate march in history.

Anna Domanska
Anna Domanska is an Industry Leaders Magazine author possessing wide-range of knowledge for Business News. She is an avid reader and writer of Business and CEO Magazines and a rigorous follower of Business Leaders.
« Toyota and Honda Cut Prices in China amid Antitrust Probe
Mixing pets with computer security, War Kitteh sniffs out insecure Wi-fi networks »
Leave a Comment
Close