A novel technology promises to bring super-fast charging to your smartphone. An Israeli startup StoreDot is working on a technology that it claims will fully charge your smartphone battery in flat 30 seconds; however, it would be years before the device will be commercially available. 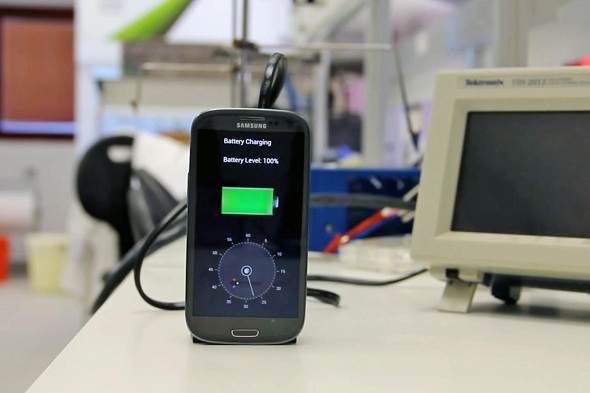 Dubbed as a product of the nanotechnology department at Tel Aviv University, its technology is said to be cost-effective and
environmental friendly

The company demonstrated for the first time a prototype of its device at Microsoft’s Think Next Conference in Tel Aviv. In the demo a Samsung Galaxy S4 was fully charged within half a minute. Currently the StoreDot prototype works only with Samsung’s Galaxy S4 handset only, but the company says that it’s working towards making its technology compatible with other smartphones as well.

Dubbed as a product of the nanotechnology department at Tel Aviv University, its technology is said to be cost-effective and environmental friendly, a nanodot battery uses peptide molecules that form short chains of amino acids that boost electrode capacity and electrolyte performance. These bio-organic materials when combined together, create proteins which have become quite popular with body-builders because of their protein creation have been used in a wide array of applications for skin care. StoreDot believes peptides can also be widely used for charging smartphone batteries.Till now, creating fast-charging batteries were created using heavy metals such as cadmium which are both toxic and expensive.

An investment of $6.25 million was raised by StoreDot and plans to raise another $ 20 million to develop its facility for production of its organic batteries. While StoreDot is still in the process of patenting the new technology, the company is aiming at a late 2016 timeline to go into mass production with an aim of extending the technology on to the electric car market as well as on consumer electronics. If this new technology can charge a car battery in a minute or so, its effect on greener motoring will be hard to determine. But for that to happen, the company will have to make sure that it can build batteries that can sustain multiple chains of amino acids and that can retain a higher
charge.

According to reports the present size of the battery-charger is similar to that of a laptop charger, but the company is working at ways to decrease the size. Moreover, the company also disclosed that the charger will cost somewhere around $30, which is almost double the cost of a regular charger available in the market these days.