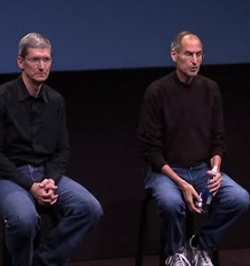 Steve Jobs, 55, CEO, Apple Inc. has taken yet another medical leave of absence, the second time in the two years maintaining his CEO profile and leaving Tim Cook, the Chief Operating Officer of the company in charge during the leave. Steve Jobs was diagnosed with a very rare form of Pancreatic Cancer somewhere in 2003; however, the exact time still remains strictly confidential citing privacy reasons. This type of Cancer spreads very slowly with the Migrating cells left undetected for a very long time.

Jobs already underwent liver transplant in 2009 which is done to prevent tumorous cells to spread to the liver.

This form of Neuroendocrine cancer produces high level of hormones, hampers day to day functioning and affects the digestion. Steve Job’s health condition became the buzz of the day after it was declared that his tumor was removed in 2004. The liver transplant reason was not revealed. His body is unable to continue weight as he has been undergoing treatment. Speculations about the recurrence of Cancer cannot be made as the weight loss can be attributed to several factors and their combinations with or without the recurrence of Cancer. The Apple employees received an email from the CEO declaring that Tim Cook, Chief Operating Officer, will take over the company’s operations.

Timothy Cook, COO, Apple Inc. has received a compensation of $59.1 million for operating as the CEO during Steve Job’s six months long medical leave for a liver transplant. The “outstanding performance” was the reason he received the special bonus and stocks of the company with a salary of $800,000. For the current Fiscal year, Cook’s salary will be $900, 000 due to additional responsibilities. In 2008. Steve Jobs named Cook and Peter Oppenheimer, CFO as the potential successors. CFO Oppenheimer was paid $29.8 million, compared with $1.4 million the year before. He received $28.4 million worth of stock awards, and his base salary stayed at about $700,000. Steve Jobs had a salary of $1 last year with 5.5 million shares in the company that he hasn’t sold till date.  Apple has already announced that their Feb 23 annual meeting will hold a vote for a CEO succession plan.

The Central Laborers’ Pension Fund which owns a considerable stake in the company has asked Apple Inc. to maintain an emergency strategy and review their succession plan annually in order to develop internal candidates and has requested the board of Directors to review the plan with shareholders every year.

Apple is not in favor a Public Succession Plan and has asked the investors to vote against it as it would reveal a lot of sensitive information in the Public which could be used against the company’s management.

Apple declared that the succession planning is carefully considered in order to maintain a superior quality of the management team leaving certain provisions aside to ensure a flexible approach to adapting to the dynamic market conditions.

Gene Munster, Apple Analyst at Piper Jaffray believes that Apple will be alright even if Jobs leaves as it is a combination of several creative geniuses. Let’s hope that he is right, and wish Steve Jobs the best of health and the speediest recovery.