The Amazon Labor Union was formed by workers who had previously protested over the company’s reaction to the Covid-19 outbreak.

A grassroots effort to form the first-ever union at an Amazon facility in the United States has gained a considerable lead in voting, raising the prospect of a historic victory for organized labor at the ecommerce behemoth.

At the close of voting on Thursday, the Amazon Labor Union was ahead by 1,518 votes to 1,154. Workers at JFK8, a warehouse in the Staten Island borough of New York, voted in person during a five-day period that ended on Wednesday.

The National Labor Relations Board did not provide information on the overall number of people who showed up at the facility. Officials said the process will restart and will likely end on Friday. 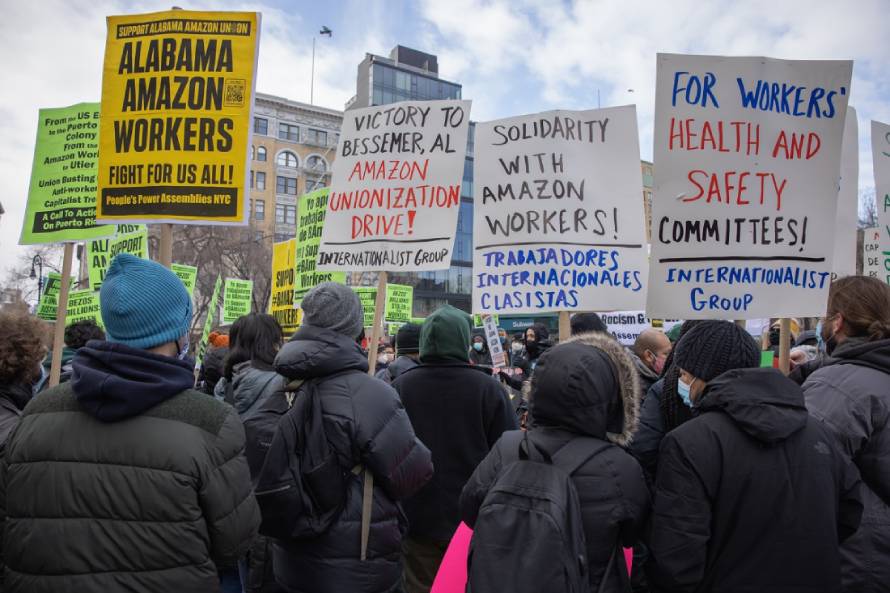 The Amazon Labor Union was formed by workers who had previously protested over the company’s reaction to the Covid-19 outbreak.

Separately, a rerun of an Amazon union vote at the BHM1 factory in Bessemer, Alabama, appeared to be a resounding setback for organized labor. At the end of the count, the “No” vote had a 993 to 875 advantage. Unlike the in-person voting on Staten Island, the Bessemer election was held through postal ballot. There are also 416 disputed ballots awaiting examination, which might alter the outcome.

The NLRB has scheduled a hearing to kick off the process in the coming weeks. The election was much closer than the initial vote by BHM1 employees in April of last year, when Amazon won by a landslide, 1,798 votes to 738. Because of what was regarded to be inappropriate intervention in the campaign by Amazon, Labor authorities demanded a rerun.

“We believe that every valid vote must be counted, and every objection heard. Workers here deserve that,” Stuart Appelbaum, president of the Retail, Wholesale and Department Store Union, said on Thursday.

To begin organizing, the union needs a simple majority of the return vote in both elections.

According to Pew Research Center surveys, workers’ rights activists see Amazon as an ideal target for organizing efforts at a time when support for unions is on the rise in the United States. Amazon’s rapid workforce increase during the epidemic – the business now employs more than 1.6 million people globally — has brought its methods under scrutiny, notably in terms of working conditions. Higher salaries, better care for wounded employees, and an end to what organizers describe as murky productivity tracking systems are among the demands of union supporters.

The ALU was formed in the aftermath of anger over Amazon’s treatment of workers during the early days of the coronavirus outbreak. It is not endorsed by any bigger labor organizations.

ALU President Chris Smalls was fired by Amazon in March 2020 for violating social distancing norms and endangering the safety of others, according to Amazon.