SpaceX plans to build a constellation of Starlink satellites 12,000 strong.

California-based rocket builder SpaceX successfully launched a new batch of Starlink internet satellites into orbit late on Wednesday. A group of 60 satellites were launched and also nailed a rocket landing at sea to top off the mission. The launch is the second event in five days for SpaceX.

On Saturday, a separate Falcon 9 rocket sent NASA astronauts Bob Behnken and Doug Hurley aboard a Crew Dragon capsule to the ISS. This kicked off the SpaceX’s landmark Demo-2 mission. The two astronauts docked with the orbiting lab around 19 hours later and will remain in the ISS for 1-4 months. The Falcon 9, whose first stage had already flown four times before, lifted off at 9:25 p.m. EDT from the Space Launch Complex 40 at Cape Canaveral Air Force Station in Florida. The rocket used in the satellite launch is the second Falcon 9 first stage to fly five times. The booster previously launched two other Starlink missions as well as a batch of Iridium NEXT satellites and a Canadian communications satellite. 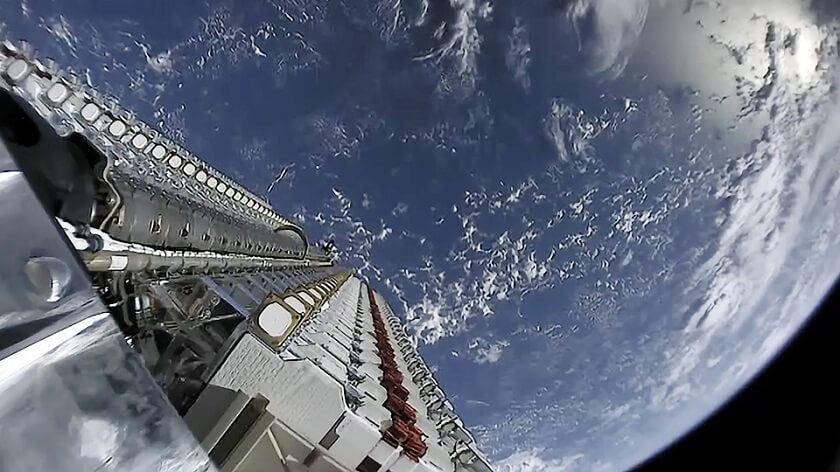 SpaceX plans to build a constellation of Starlink satellites 12,000 strong.

The first attempt at flying a booster by SpaceX’s did not go as planned. That early stage, which launched 60 Starlink satellites this past March, experienced an engine anomaly as it climbed into the sky. Though the satellites launched into orbit, the booster missed its landing on a drone ship at sea and was successfully destroyed. An investigation revealed that some residual cleaning agent was trapped in the engine, which caused the anomaly.

The recent satellite launched rocket landing involved the drone ship ‘Just Read the Instructions.’ The ship, which was initially based on the West Coast, was moved to the East Coast last year. This is the first mission it was used since the shift. This is because SpaceX’s first drone ship, “Of Course I Still Love You,” was busy bringing the Demo-2 booster back to port. This is the first time that SpaceX has had both of its drone ships operational in the same ocean.

The latest flight is the eighth 60-satellite mission for SpaceX’s Starlink project, which brings the total number of satellites launched for the nascent broadband network to 482. The launch was initially planned to take off in mid-May but was duly postponed due to poor weather and schedule conflicts.

SpaceX plans to build a constellation of Starlink satellites 12,000 strong. The project is designed to provide high-speed internet service to customers worldwide, especially to people in remote areas. SpaceX founder and CEO Elon Musk stated that at least 400 Starlink crafts are needed before SpaceX can roll out minimal internet coverage. The company requires at least 800 satellites to provide moderate coverage. That service could start later in 2020.

With the considerable number of satellites in orbit, SpaceX is operating the most extensive satellite fleet ever in orbit. However, ever since the first launch, SpaceX company is always under fire from astronomers as well as scientists over concerns that the constellation’s apparent brightness will disrupt astronomical observations.

SpaceX has been rigorously experimenting with different ways of reducing the satellites’ brightness. Musk and SpaceX stated that they would add unique sunshades to the upcoming Starlink satellites. These sunshades would act as a visor of sorts that would limit the craft’s reflectivity. The first such visor-equipped Starlink craft took flight on the recent mission.

To get Starlink started and running, SpaceX needs more than just satellite launches. It also requires user terminals. In March 2020, SpaceX was approved for up to one million user terminals as part of a blanket license. The hardware used will be simple enough that anyone can install it, and according to Musk, who stated that the terminals look like a “UFO on a stick.” The terminals would be available with two simple instructions — the plugin and point at the sky instruction— and would be equipped with actuators that ensure they’re pointing where they should be at all times. Following the satellite launch successful liftoff, the veteran Falcon 9 booster landed on a floating platform at sea, marking the company’s 53rd successful recovery. SpaceX has two more flights on the pipeline for June, another batch of Starlink satellites, and an upgraded GPS satellite for the U.S. Space Force.

Anna Domanska
Anna Domanska is an Industry Leaders Magazine author possessing wide-range of knowledge for Business News. She is an avid reader and writer of Business and CEO Magazines and a rigorous follower of Business Leaders.
« Moderna Racing towards Second Phase of COVID Vaccine Trials
Is Mercedes Benz GLS Worth the Money? »
Leave a Comment
Close

The Federal Communications Commission rejected by a vote of 3-2 on Tuesday to freeze the rollout of Ligado Networks’ nationwide mobile bro...
17 hours ago