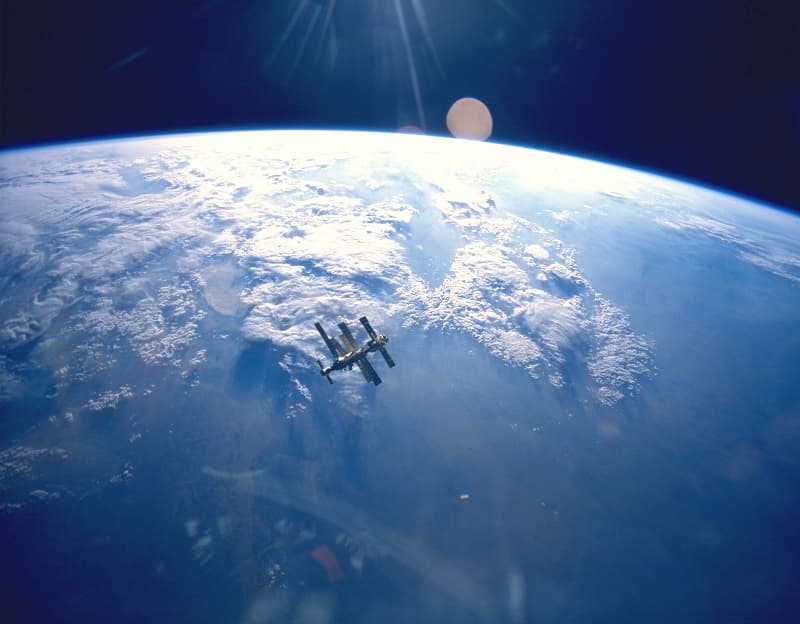 Thirty years ago, the Boulevard Room at the ritzy Conrad Hilton Hotel in downtown Chicago offered sizzling steaks, an extravagant stage show, and a flash of a teasing peek into the future. At the front of the hall was the “largest hotel ice rink in the county”, on which a troupe of the tutu-wearing girls danced for the crowds of diners. Black-tie wearing diners was given a rare glimpse of a dream more grandiose than grand: Space Tourism, a dazzling dream ripe for picking.

Albeit, details of the announcement are like gold dust, a Chicago-area newspaper called the Suburbanite Economist wrote that hotel heir and business magnate Barron Hilton, was dickering around the idea of building a hotel on the Moon.The idea disappeared in the coming decades, only to resurface again in 1999, when Hilton was reportedly planning to cut the ribbons at an opening ceremony of a $25 billion space hotel for the idle,space tourists with fat wallets to fly.

With the world gripped by space fever in the present world, it’s obvious that a flight of fancy is the latest to catch the attention of mega-wealthy entrepreneurs, who’re clearly benefitting from the privatization of the space business. Some of these business moguls are involved in the much wider, the consumer side of the space adventure business, from Solar System exploration to sub-orbital space tourism.

The sweet, splendid privilege does not come by cheap; tickets cost as much as $250,000 each. We’ve wrapped up facts and figures on luxury space tourism gigs. Like any trip, space tourism entails questions that a smart tourist always asks. What are the trip’s highlights? Is it safe? What is the cost? If you want to escape the crowd, here’s a little itinerary for your next travel gig, as long as you have the bucks. After all, a travel itinerary, comprising of the trip’s highlights is the cure to untold gusto and anxiety!

More than 650 people from around the world have signed up for Virgin Galactic’s SpaceShipTwo that will take them on an outer space holiday. Of course, the wealthiest are first in line, led by Stephen Hawking, Tom Hanks, Ashton Kutcher, Katy Perry, Brad Pitt and Angelina Jolie to cavort in zero-gravity. If every goes according to the plan, Lady Gaga will become the first singer to perform in space.

Space tourism isn’t just a battle against economics and physics. It is a steep mêlée between companies conjuring up luxuries in space to woo tourists with deep, deep pockets. For some of these flights, passengers do not need any anti-gravity training. The 5 hour trip will be stumping up $75,000 by World View Enterprises offers passengers an on-board bar to sip a refreshing drink and take a mighty view of the space from suborbital altitude, all in a luxury flight capsule hoisted by a giant balloon.

Virgin Galactic founder, Richard Branson has never been one to come up with a lackluster trip, or a party for that matter. Be it celebrations on Necker Island with Kate Moss and the likes to celebrate his birthday or the completion of an eerily delightful Space trip.The Virgin Galactic SpaceShipTwo Space Trip will give its A-list holiday goers access to exclusive Virgin Group events like the G-force training, text flight celebrations in Canyons and mesas of Mojave Desert where cocktails will appear to be working till the dawn. Then there’s Zero-G Weightless Experience by Zero Gravity Corporation, a 90 to 100 minute trip consisting of parabolic arc flights that would leave you flying like a superhero in weightlessness, for people who could pony up $4,950. The parabolic flight is the cheapest of all space-travel gigs that gives a Lunar and Martian gravity experience. It offers Zero-G flight suit and merchandize, Regravitation celebration and photos and videos.

Unlike other companies offering a host of freebies, the $20 million Dragon Space Trip is a low Earth orbital flight for mega-spenders, by SpaceX founder Elon Musk who wants to revolutionize access to space. The 370- kilometer orbital flight is the first of the revolutionary space flights planned by Musk, who wants to include flights, allowing human exploration and settlement of Mars by 2026 under the company’s Mars One colonization project.Mars One, a private initiative is also training “pioneer settlers” who will live and work on Mars, making it their permanent new home by 2023.

A Russian company, Orbital Technologies launching a hotel in space called “Hotel in the Heavens” in 2016 for the ultra-rich, is the latest example of extreme space holiday making projects. It will cost wealthy Russiannearly $1 million to travel on a Russian Soyuz rocket and a five-day stay, where they will get a glimpse of 16 sunrises and sunsets a day as their orbit Earth. Without a doubt, the prospect of zero-gravity offers all sorts of weightlessness activities that can only be dreamt of on Earth. By contrast, Las Vegas hotel and aerospace entrepreneur Robert Bigelow is betting $500 million on inflatable space habitats on the lunar surface, where opulent spenders can rent a room at $400,000 a day.

Being rich has never offered so many luxurious opportunities for space adventure. The world is fast filling up with more and more billionaires and entrepreneurs who’re seeking newer and exciting ways to provide mega-spenders the ultimate hi-tech thrills in the eerily, clam Galaxy. Who knows, in 2030, people could be unwrapping tickets to exploring the solar-system and beyond for Christmas!