The S&P 500 Index is showing a continuous run for the past sessions fuelled by tech stocks that are seeing a bullish run even during the pandemic. It’s up 2.9% for the week and on track for its longest weekly winning streak since December.

The S&P 500 and the Nasdaq both have scaled record highs and the benchmark is on track for its best August in 34 years, partly powered by a rally in technology stocks.

The rally is being driven by prospects of super-low interest rates for a prolonged period and hopes of a medical solution to the COVID-19 pandemic.

The tech sector saw a 0.6% rise pushing the index. Energy stocks also saw a 0.8 % increase as the Hurricane Laura did not wreak havoc as expected in Louisiana and Texas.

“Technology has kind of become the recession play. With everybody piling in into it, the momentum is certainly on technology’s side,” said Paul Nolte, portfolio manager at Kingsview Asset Management in Chicago. 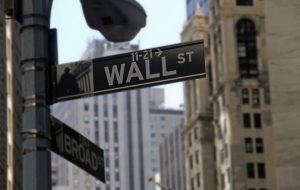 HP also rose 5.9% after it reported a better profit for the latest quarter than analysts expected.

“Equity markets are in a kind of a risk-on trade. It’s a recognition that the Fed is probably not going to be touching interest rates for quite some time,” Nolte noted.

The Federal Reserve unveiled a plan Thursday to support inflation and restore the U.S. economy from its biggest downturn since the Great Depression.

Low-interest rates and massive amounts of bond purchases by the Fed have helped prop up the economy, and they’re a central reason the S&P 500 has been able to recover from its nearly 34% plunge earlier this year, even though the pandemic is still raging.

The latest data on U.S. consumer spending shows an increase in July, which is expected to dry up now the fiscal stimulus payoffs have stopped and the pandemic is showing no signs of petering off. Consumers increased their spending by 1.9% for the third straight month of gains, though it was a slowdown from June’s 6.2% growth.

What is driving the tech stocks are the promising results coming out of the trial runs for the vaccines. The approaching elections are driving the market volatility too.

Here are some indicators of some non-tech and tech stocks:

United Airlines rose 2.1% on news of job cuts and furloughing of pilots. Coca-Cola Co gained 1.4% as it announced plans to nearly halve its operating units and offer voluntary separation to 4,000 workers.

Tesla Inc and Apple Inc rose 1.7% and 0.3% ahead of their stock splits that take effect on Monday. The S&P index recorded 13 new 52-week highs and no new low, while the Nasdaq recorded 59 new highs and 11 new lows.

Goldman Sachs analysts said in a recent report that the S&P 500 “has never been more dependent on the continued strength of its largest constituents.”

Some investors worry the companies powering this year’s equity rally could become the market’s downfall due to legal tangles (Apple’s anti test imbroglio), or a move higher in bond yields. Alphabet, Facebook, Amazon and Apple face a series of federal government probes into allegations that they unfairly defend their market share.

Anna Domanska
Anna Domanska is an Industry Leaders Magazine author possessing wide-range of knowledge for Business News. She is an avid reader and writer of Business and CEO Magazines and a rigorous follower of Business Leaders.
« Tokyo Stocks Plunge but Experts Remain Market Positive
US Wind Power Adds 1800 MW of Capacity in first quarter of 2020 »
Leave a Comment
Close