Soon your window will become a transparent screen! 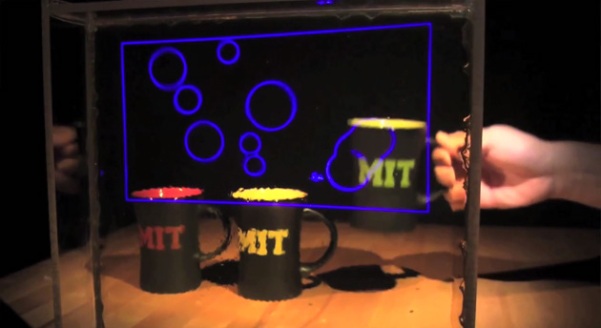 After all the fancy futuristic screens that science fiction films have featured in their universes, scientists have finally created a real transparent screen able to turn any window into a display for moving images. So, just go and pick the window!

MIT has unveiled its prototype nanoparticle display, which generates color images on a glass surface by just ‘tuning’ a silver nanoparticle coating until it allows just certain light wavelengths pass through. This procedure is not only cheap but also compact, since it only requires the coating and some off-the-shelf projector equipment. The screen does not need mirrors or beam splitters; therefore, users are able to see the picture displayed basically from any angle. Furthermore, the stick-on screen’s nanoparticles, which reflect blue light into a liquid polymer, can be fixed or stuck on to any window. Imagine the possibilities!

Different kinds of transparent screens are now in commercial development. From devices like Google Glass to crystal transparent screens similar to the ones conceived for the film Minority Report, crystalline displays will be part of people’s daily life in the near future. However, while these kinds of screens employ expensive and still complicated technology—like a head-up display projected onto a small prism set in Google Glass, or LEDs embedded within crystalline computer screens—the nanoparticle display requires a very simple procedure to be created and used. “We literally just pour the nanoparticles into the polymer before it solidifies,” explained lead researcher Chia Wei Hsu, a graduate student from Harvard University and MIT. All in all, only a few thousandths of a gram of nanoparticles are enough for a square centimeter of screen, which means that the stick-on screen’s technology is relatively cheap.

Concerning this latest invention, the stick-on screen displays only one color of image at the moment, since each kind of particle reflects just one color. Nevertheless, researchers say that it is possible to produce a multiple color nanoparticle display. The only issue is that, at least for now, the screen will become more opaque as more nanoparticles are added to it. “Since it’s so simple to deploy, you could paste this (plastic) sheet onto any surface,” Hsu said, “you could put it on store front windows for advertisements or information about what’s inside the store, or we could use it for office windows, so you could then have your presentation (shown) on the window of your office.”