Which smartphone camera are you?

The Japanese Electronics conglomerate has planned to ship the sample unit of IMX586 from September this year with an attached price of 3,000 JPY ($27) excluding taxes.

According to the latest rumor, Xperia XZ3 could be the first smartphone to carry Sony’s newest image sensor.

Before Sony, OEMs including Nokia and Huawei has attempted to install such high-resolution pixels camera on devices like 808 PureView and P20 Pro respectively.

It is widely known that minimizing pixel size results in high-resolution pictures but lowers light collection process. Hence the performance of the imaging lens with tiny-sized pixels gets affected by the dark lights. On the other side, a larger sized pixel increases light absorption area but gives low-resolution images.

Sony’s semiconductor division achieved both the targets by miniaturizing a pixel to a size as tiny as 0.8 microns for setting higher resolution efficiency and using Bayer Quad Array for achieving better photoelectric conversion efficiency. 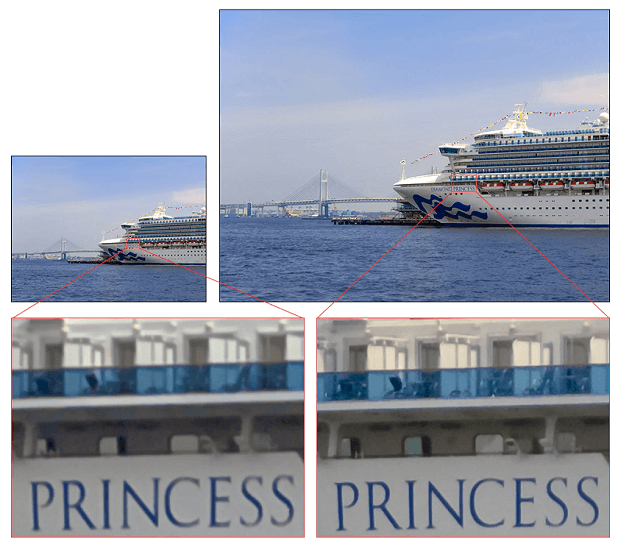 High clarity in the digital zoom available on a smartphone camera. Source: Sony

With the miniature base, Sony IMX586 can be integrated on any mobile devices and the high-resolution powers the lens to shoot the high-definition images even with the digital zoom available on the smartphone camera.

To give an optimum result, the new sensor employs the Quad Bayer color filter array to deliver an RGB image. Here, the adjoining 2×2 pixels arrive in the same hue, in contrast to original signals received in the alternate color series, and facilitates Sony IMX586 deliver both high sensitivity and high resolution.

During dim light shooting, the signals from the four adjoining pixels, all in the same hue, are added in the Quad Bayer Array of Sony IMX586 to double the sensitivity level equivalent of 1.6-micron pixels, delivering bright and low noise images of 12 MP resolution.

In addition to this achievement, IMX586 abodes Original Sony exposure control technology and signal processing functionality. These inbuilt features make Sony IMX586 provide a real-time output and a greater dynamic range, that is, four times higher than conventional image sensors, the company claimed in a statement.

Even pictures in either bright light or dark areas can be shot with minimal highlight blowout or loss of shadows details while viewing the image on a smartphone.