The solar wallpaper could be your home monitor

IKEA comes up with a solution to provide constant solar power

Drive on the World’s First Solar Panel Road in France

Scientists of the best minds from Imperial College London, University of Cambridge and Central Saint Martins collaborated to create solar wallpaper. This new type of ultra-thin solar panel is made from micro-organisms called cyanobacteria. These living organisms make use of photosynthesis to harvest energy from sunlight. This energy-harvesting wallpaper is made by inkjet-printing circuitry and the cyanobacteria on paper. The use of these particular organisms is because they are able to survive through the printing process. Post that they also perform photosynthesis to harvest power.

The team describes it to be two-in-one, a bio battery as well as a solar panel. According to them, an iPad-sized solar wallpaper could provide electricity to run a digital clock or an LED bulb. The solar bio battery is known as microbial biophotovoltaics (BVP), a new kind of renewable energy that makes use of cyanobacteria to convert light into electricity. These researchers show how cynobacteria can be converted into an ink that can be further used in an inkjet printer.

The inkjet printer helps reducing the cost of production of BPVs. According to Andrea Fantuzzi from the department of life sciences, ICL, “Paper-based BPVs are not meant to replace conventional solar cell technology for large-scale power production, but instead could be used to construct power supplies that are both disposable and biodegradable.”

Uses of the solar wallpaper

The researchers suggested that this could boost people into making new kinds of electronic devices. These devices would be made from paper and printed photosynthetic bacteria. This means it could either be used to monitor patients with diabetes or even air quality at home. These paper-built BPVs aren’t still commercialized yet because they are only the size of one’s palm. Although, they are yet to take it up a notch by resizing it in A4 so that it can determine the output on a much larger scale. 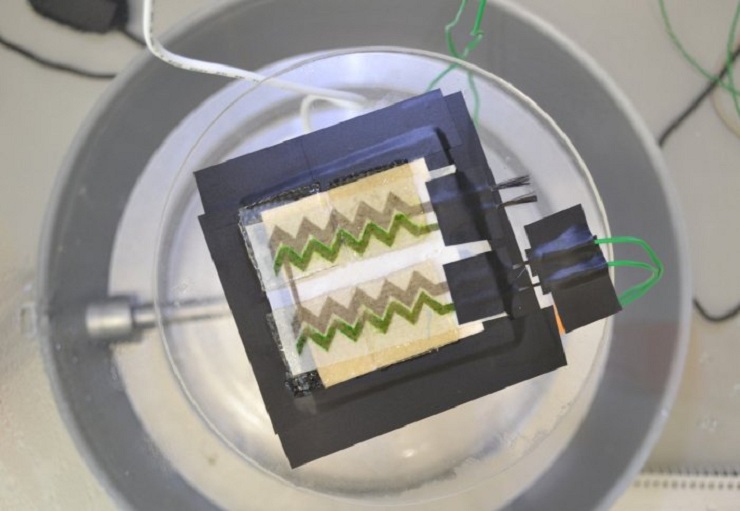 The paper-built BPV in the size of a palm.

The researchers feel that this invention could go a long way in dealing with many things. “We think our technology could have a range of applications such as acting as a sensor in the environment,” stated Marin Sawa, co-author from the Department of Chemical Engineering, Imperial College London. She further added, “Imagine a paper-based, disposable environmental sensor disguised as wallpaper, which could monitor air quality in the home. When it has done its job it could be removed and left to biodegrade in the garden without any impact on the environment.”

These photosynthetic micro-organisms called cyanobacteria have been present on planet for over billions of years. They are the major reason why the earth’s atmosphere is rich in oxygen. Commenting on the solar wallpaper, Professor Christopher Howe from the department of Biochemistry said, “This is an exciting proof-of-concept. The challenge now is to make panels that are more powerful, long-lasting and robust.”

Christy Gren
Christy Gren is an Industry Specialist Reporter at Industry Leaders Magazine she enjoys writing about Unicorns, Silicon Valley, Startups, Business Leaders and Innovators. Her articles provide an insight about the Power Players in the field of Technology, Auto, Manufacturing, and F&B.
« 3 Incredible Productivity Hacks for the First Time CEO
Walk: Not to Save Fuel But Generate Electricity »
Leave a Comment
Close