Solar-Powered Roadways might just become The Roads of Our Future.

What if we could convert all the roadways in America into a massive solar panel that could generate three times the nation’s power needs? Well, this isn’t just an idea, that’s exactly the technology that Scott and Julie Brusaw, co-founders of Solar Roadways have been experimenting with. Besides, their first prototype of the Solar Roadways project has already received federal funding. 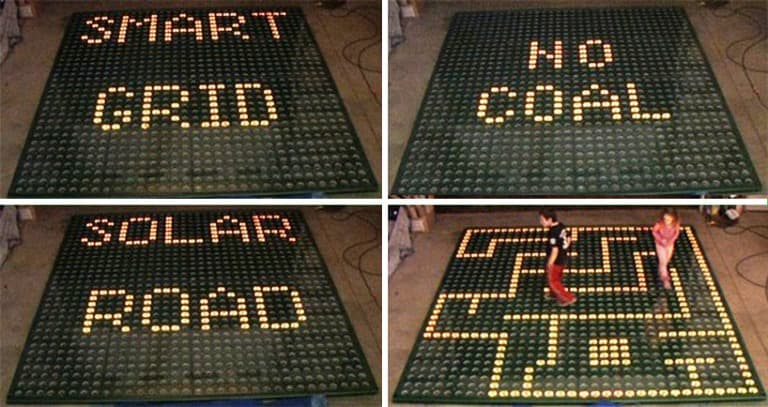 The Sagle, Idaho-based Solar Roadways, a company that primarily intends to pave our roads with solar panels, recently surpassed its massive funding goal of US$1-million on crowdfunding site Indiegogo. The company plans to utilize the funds to hire engineers to see the project through to huge scale implementation that could ultimately provide an alternative source of clean energy and a safer means of transport.

The hexagon shaped panels are built of four layers. There’s a half-inch thick glass surface, along with a layer of LED lights, then comes an electronic support structure (circuit board) and the base layer is entirely made of recyclable materials. The panels, which snap together to form circuits, can withstand more than 13000kg of pressure, according to Brusaw.

The LED lights fitted in them can be programmed to provide lighting on dim roadways, warn drivers behind the wheel about the forthcoming dangers on the road or could even be reconfigured entirely to change the line up of lanes. In parking lots, the lights can be restructured to provide more handicapped parking spaces or turning the lot into a sports field with complete goal lines. During the winter season the panels can be programmed to heat up and do away with the need for snow ploughs and de-icing agents. Streets could literally be kept warm in the cold weather.

Most importantly, this initiative makes the way for roads which can produce clean, alternative power source and help cut back on fossil fuels that would theoretically reduce greenhouse gas emissions by up to 75% apparently. By producing electricity, Solar Roadways says it can provide electricity to homes and businesses connected through driveways and parking lots. The Brusaw couple also intends to create more designs that could be laid anywhere like bike paths, dance floors, highways, courtyards and playgrounds. They believe this project could completely alter the existing motorway infrastructure, avert accidents and ultimately help in saving the planet from an environmental catastrophe.

While the dream is rather an expensive one, it is a worthwhile investment. It could be a powerful transformer in more ways than one. There’s still a long road to travel before solar highways are a reality, the company estimates that the technology, when fully implemented in all 50 states, would generate thrice the amount of electricity that’s currently burned all over the country. After all, the ultimate goal is to clean up Earth and with the use of solar roads, combating climate change and global warming is well within our reach.

The art pieces for Lamborghini’s NFT have been created by renowned artist Fabian Oefner, who is well-known for harnessing scientific properties and using them to highlight the in
3 hours ago

As part of its campaign to work for racial equity and justice, Apple is also spotlighting Black businesses and curating content by Black voices to showcase innovation and raise awa
3 hours ago