To the massive crowd of refugees and migrants stuck in Greece and other regions of Europe, a smartphone is a lifeline, as long as its battery lasts. However, access to electricity can be hard to find unless someone can harness solar energy and turn it into solar-powered charging stations to provide free electricity.

For refugees fleeing war in Syria, a smartphone is the most precious possession. It provides solace to those who have lost their loved ones to the war and been forced out of their homes. To some, it’s a friend that documents their migration struggle. It also plays a critical role in connecting and re-connecting refugees with worries friends and families. Moreover, it helps them send their location via GPS to contact official authorities when they are taking a dangerous journey. In particular, it decreases their reliance on criminal groups and traffickers, giving them greater autonomy over their journeys. 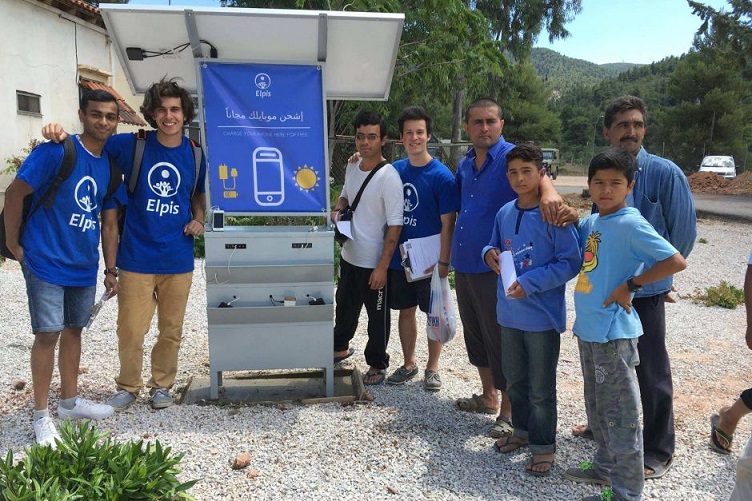 And yet, access to electricity can be hard to find in increasingly overcrowded makeshift camps. Similarly, cafes, where electricity is always free are always crowded with people anxiously waiting over a few sockets to charge their devices to phone home.

To combat this problem, a group of students from Edinburgh University has designed a mobile phone charging station powered by solar energy. They have installed two solar-powered charging stations in camps, each configured to generate power for 12 plugs an hour using solar energy. Each unit can serve up to 240 people each day.

Every day, hundreds of refugees arrive on Greece’s shores, exhausted from clinging onto boats. Some snap selfies to share with their families they have left behind, others, log into messaging applications, Facebook, and Google Maps to plan their onward journey to safer parts of Europe. Often, they are stranded at the port of Lesbos, sharing one plug, and no battery on their devices.