Solar Impulse pilots takes off for flight around the world

SOLAR-JET project is a four-year program funded by Europe’s Seventh Framework Programme for Research and Technological Development. The breakthrough invention could even help recycle harmful greenhouse, CO2 and use it into petrol, diesel, and jet fuel kerosene.  They believe a full-scale solar concentrate would be able to product up to 20,000 liters of jet fuel per day.

The achievement was announced by researchers who had spent past four-years creating a solar reactor using concentrated sunlight to heat up metal oxide. In a press release, European commissioner for research, innovation and science, Máire Geoghegan-Quinn, said that “This could greatly increase energy security and turn one of the main greenhouse gases responsible for global warming into a useful resource.” She further said that it might one day help us product cleaner fuel in copious amounts for planes, cars and other forms of transport. 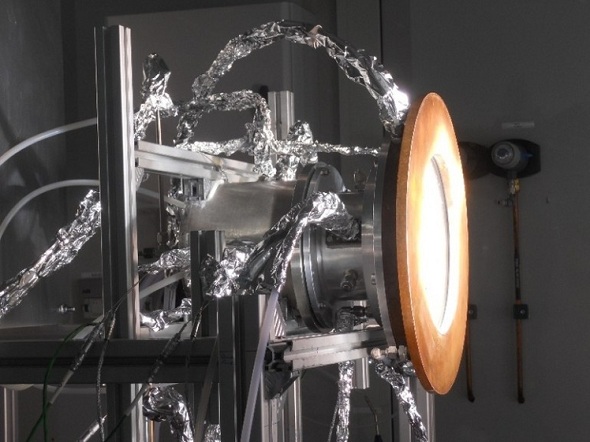 In order to produce the renewable fuel, water and carbon dioxide were subjected through temperature of 700 degrees Celsius (1292 degrees Fahrenheit) in a solar reactor. Shell, a global petroleum company then split it up using a synthetic gas known as syngas made of hydrogen and carbon monoxide.

(Syngas mixture was created using well-established Fischer-Tropsch process which is an extremely complex and dangerous process that takes place usually above 2200 c (3992 F). Syngas thereafter can be extracted once oxygen us removed, which is dangerously explosive. )

Andreas Sizmann, at German Bauhaus Luftfahrt believes that it will create a heavy demand for renewable hydrocarbon fuels. ‘This is an extremely important milestone in the long-term process of developing a truly sustainable alternative fuel future,’ he said in a statement. ‘The process draws from virtually unlimited resources with no prohibitive cost “show stopper” in sight.’

According to Solar energy engineer Jan Davidson at University of Minnesota in the US, the production of synthetic gas or syngas using sunlight is still in infancy, ‘Many groups around the world are working on the same process using different reactors, but have the same goal of reaching commercially viable solar-to-fuel efficiency. It’s an exciting approach to synthetic fuels that also stores solar energy in chemical form.’

According to Sizmann, they will be successfully able to demonstrate syngas production in a 50kW reactor using concentrated sunlight. The process will help them do an extensive chemical analysis and test it on products. However, the reach challenge would be making it economically viable without increasing the production costs. Since ‘Sunlight, carbon dioxide and water are basically an unlimited feedstock, When the long term goal of 15% overall energy efficiency is reached, 20,000 litres of kerosene per day could be produced in a solar tower system of one square kilometer.’

Christy Gren
Christy Gren is an Industry Specialist Reporter at Industry Leaders Magazine she enjoys writing about Unicorns, Silicon Valley, Startups, Business Leaders and Innovators. Her articles provide an insight about the Power Players in the field of Technology, Auto, Manufacturing, and F&B.
« Indian American Scientist develops a printable 50- Cent Microscope that folds like Origami
World’s Most Amazing Panoramic ‘CENTR-Camera’ that records 360-degree video in 4K »
Leave a Comment
Close