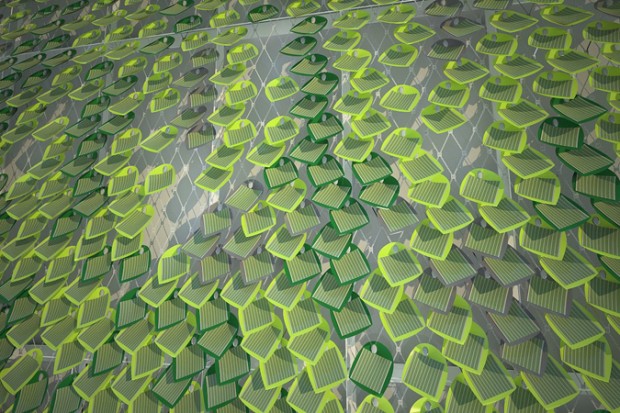 Having fast become recognized for the green consultancy they provide in conjunction with sustainable product development, SMIT has come out with a new solar energy system called Solar Ivy;  leaf-like photovoltaic panels which use both the sun and the wind to generate electricity.

Inspired by the ivy often seen on traditional mansions, Solar Ivy, developed by Sustainably Minded Interactive Technology (SMIT), promises to be totally modular and easily installable on any building.

A customizable, modular photovoltaic system that can be used for a wide range of applications, Solar Ivy is being offered by SMIT in a range of colors, leaf shapes, and photovoltaic panel types, and the company is currently taking orders for the first commercially available version of the product.

The Solar Ivy concept started off as CEO Samuel Cabot Cochran’s Industrial Design Thesis project at Pratt Institute in Spring 2005. His project, then called GROW, was a marriage of thin–film photovoltaics with piezoelectric generators in a hybrid wind and solar energy delivery system.

The Solar Ivy that SMIT now offers, six years after it was conceptualized by Sam, consists of a system of “leaves”, roughly the size of cantaloupes, with thin-film photovoltaic panels adhered to them.

Solar Ivy is available to customers in the form of two basic choices : either a completely recyclable, non-toxic organic photovoltaic panel which is priced at around $18 per watt, or a CIGS panel, which costs about $9 per watt and is the most efficient type of thin-film available in the market. Following choosing the panel type, customers are offered the option of choosing their preferred colour and shape, depending on the effect they desire to create once the system is installed.

The effects of SMIT’s commitment to work with clients through the entire product development and installation processes can clearly be seen, with University of Utah having already approved funding to install Solar Ivy on the south-facing facade of the University’s Orson Spencer Hall building.

The system itself is a very simple one.

The process of installing Solar Ivy requires the installation of a stretchable and bendable steel wire mesh on the building’s interface, which becomes the surface for stitching on the Solar Ivy “leaves” and given its flexibility, allows for a wide range of positioning and density options while installing the system. The system also allows for individual panels or “leaves” to be replaced in case of damage or further improvement in technology.

Using the sun and the wind to provide renewable energy for the building, the Solar Ivy system also becomes a shade screen that minimizes solar heat gain.

SMIT, with its innovative product and easily installable design, has already found quite a few takers, with Solar Ivy scheduled to be installed at a number of landmark public buildings such as the Montreal Biosphere Environment Museum, which will be installing a Solar Ivy wall, and Science World Vancouver, with whom SMIT is developing an innovative new exhibition space.

The iPad manufacturer has previously sought to remove China as the main Apple manufacturing country. Trade tensions and a strict Covid-19 policy has previously resulted in supply c
24 hours ago