Solar Impulse pilots takes off for flight around the world

SunEdison and TerraForm turn to wind generation, will acquire First Wind for US$2.4 billion 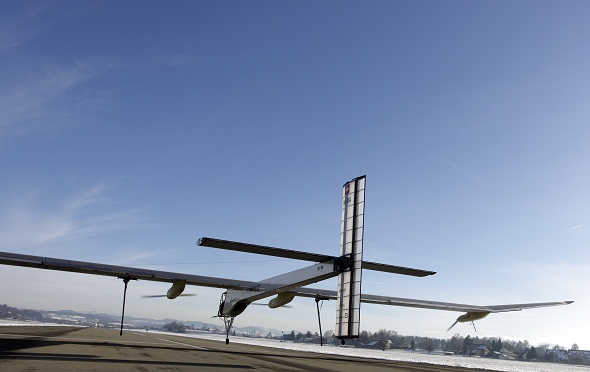 The Solar Impulse 2 is being piloted by Andre Borschberg of Switzerland.

Air travel has stepped into a new era. In a landmark journey, a Swiss solar-powered plane began its trip around the world. The plane took off from Abu Dhabi, United Arab Emirates on the morning of 9th March 2015, commencing the first attempt to fly around the world using only solar power.

The Solar Impulse 2 is being piloted by Andre Borschberg of Switzerland. Borscherg will be sharing the pilot duties with co-founder, Bertrand Piccard. The two pilots will take turns piloting the single seater each time one of them tires and needs to rest.

The Solar Impulse 2 will fly for 21,747 miles (35,000km) with 12 stops on an epic journey spread over five months, with a total flight time of around 25 days including gruelling five- to six-day stints across the Atlantic and Pacific oceans.

Its first destination is Muscat in Oman. The next destination after Oman is India where the plane will make two stops in Ahmedabad and Varanasi and then head out to China and Myanmar. The two pilots will need to cross the Pacific Ocean to reach Hawaii. From there, the aircraft will fly across the US stopping at Phoenix, Arizona and then New York’s John F. Kennedy International airport.

The next destination on their itinerary depends on the weather. The final legs after crossing the Atlantic include a stopover in southern Europe or North Africa before returning to their initial destination in Abu Dhabi in late July or early August.

Piccard, chairman of Solar Impulse said that climate change brings a fantastic opportunity to introduce new green technologies that can help humanity save energy and natural resources of the planet, thus making profits, creating even more jobs and sustaining growth.

The Solar Impulse 2 is the updated version of the first single seat solar-powered aircraft that notched up a 26-hour flight in 2010. The plane has 17,248 cells built into its structure. These cells are used to absorb solar energy which then recharges the plane’s four lithium polymer batteries.

It is made out of carbon fibre and weighs only 2.3 tonnes (2,300 kilograms or 5,070 pounds). The plane’s wingspan is about 72 meters (or 236 feet), are quite longer than a jumbo and approaching that of an Airbus A380 superjumbo. The Si2 is the first solar-powered aircraft that can stay aloft for several days and nights.

The Solar Impulse 2 will travel at around 50-100 kilometres an hour, with the slower speeds during night to prevent the batteries from being exhausted too quickly. Its progress can be monitored through live video streaming at www.solarimpulse.com.