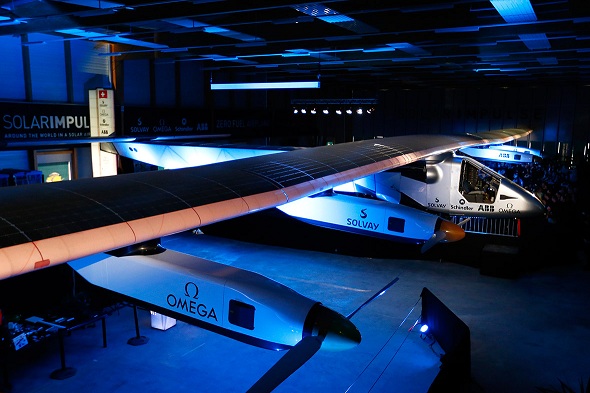 Solar Impulse 2 has better batteries for storing energy soaked up from the sun by the roughly 17,200 solar cells that cover the huge wings, thereby making Solar Impulse 2 more energy-efficient.

Pilots André Borschberg and Bertrand Piccard revealed the solar powered flight on Wednesday in a ceremony in Payerne Air Force Base. The solar powered aircraft is named Solar Impulse 2, will be used to circumnavigate the world in 2015. A series of test flights will begin next month followed by training flights over Switzerland, in preparation for the planned around-the-world trip.

Its predecessor, Solar Impulse 1, has already demonstrated that a solar-powered plane can fly across America from coast to coast and also stored sufficient power in its batteries which had been charged by the solar cells during the day to fly all through night.

But its successor needs to be able to remain in the air for a far longer span, because Pilot Andre Borschberg said he expects the solar powered aircraft to take a minimum of five days and five nights to cross the Pacific and Atlantic oceans on its journey around the world next year. But he said Solar Impulse 2 could stay airborne indefinitely.

The plane features an autopilot function, a toilet, a comfortable seat and enough space in the ergonomic cockpit for the pilot to lie down and get some rest. Engineers have worked to better the quality of the plane’s onboard batteries and used wide-ranging materials to lighten the plane.  Solar Impulse 2 has better batteries for storing energy soaked up from the sun by the roughly 17,200 solar cells that cover the huge wings, thereby making Solar Impulse 2 more energy-efficient. The wings at 72 meters (236 feet) are equal to those of the biggest passenger airplanes and is also eight meters longer than the first prototype but the entire airplane still weighs only 2.3 metric tons (2.54 tons) and it’s capable of going faster, up to 87 mph (140 kilometres per hour).

Solar Impulse will take off from the Gulf region and will fly over the Arabian Sea, India, Burma, China, the Pacific Ocean, the United States, the Atlantic Ocean and Southern Europe or North Africa. Landings will be made once every few days to change pilots and to organize outreach events with participating governments and schools and universities.

Industry Leaders has curated details and insights on the five best electric bikes that will be available by 2022.
16 hours ago

Jeff Bezos is an American entrepreneur with so much experience in leadership and business. We can learn a lot from the New Mexico-born billionaire.
20 hours ago